Cristiano Ronaldo has recently joined his new club Juventus and the Portugal striker has reached Turin for their first training session with his son Mateo. 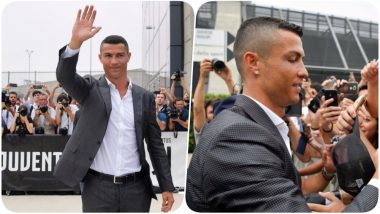 Cristiano Ronaldo has recently joined his new club Juventus and the Portugal striker has reached Turin for their first training session with his son Mateo. CR7 made a move to the new club after ending his 9-year long stint with Real Madrid. After Portugal’s exit from the 2018 FIFA World Cup, Ronaldo was seen holidaying in Greece with his family.

Ronaldo will soon meet his new teammates at Juventus and is expected to make his first appearance for the club on the weekend of August 19 for the new season of Serie A against Chievo. Pictures of his arrival at Turin went viral. Check out the video below.

Paulo Dybala also reached Juventus. Check out his picture below:

Ronaldo was last seen in China for promoting a footwear brand where he was seen playing football with the kids in the country. He even signed a few autographs with is fans in the country. After leaving Real Madrid, Ronaldo posted an emotional post for his fans. He wrote, “The years I’ve spent at Real Madrid and in the city of Madrid have possibly been amongst the happiest of my life. I have only feelings of great thanks towards this club, these fans and this city. I can only but thank all of them for the kindness and affection I’ve been shown. However, I believe that the time has come to embark on a new chapter in my life and that’s why I asked the club to allow me to move on. This is how I feel and I would ask everyone, in particular, our fans, for their understanding. I’ve had nine absolutely marvellous years here. They’ve been nine unique years. It has been an exciting time, full of success, although they’ve also been tough years because the demands at Real Madrid are extremely high, but I know very well that I’ll never be able to forget how I’ve enjoyed my football here in such a unique way. I’ve shared the pitch and dressing room with some amazing teammates, I’ve felt the affection of an incredible fan base and together we lifted three successive Champions League crowns and won the competition four times in the space of five years.”

(The above story first appeared on LatestLY on Jul 30, 2018 10:15 AM IST. For more news and updates on politics, world, sports, entertainment and lifestyle, log on to our website latestly.com).