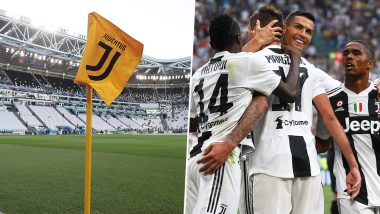 Serie A has been suspended since mid-March due to the coronavirus pandemic but after the lockdown restrictions have been eased up, the league has been planning to resume their season by next month and mostly behind closed doors. Italy are one of the hardest-hit countries with the second-highest death toll in Europe but as football is preparing to return in the nation, Italian champions Juventus are coming up with unique methods to make up for the absence of fans. Serie A 2019–20 to Resume on June 20, Coppa Italia Ties to Be Played a Week Earlier: Italy Sports Minister Vincenzo Spadafora.

According to a recent report from Corriere dello Sport, One of the methods proposed to make up for the lack of fans inside the grounds is projecting a hologram of star man Cristiano Ronaldo and his team-mates during games across the empty stadiums. Juventus are looking to put on a show while not distracting players on the pitch. Juventus Enquired About Possible Transfer of Barcelona’s Frenkie De Jong: Report.

Several teams across different football leagues have come up with unique methods of playing behind closed doors. German side Borussia Monchengladbach are filling the stadiums with cardboard cutouts of their fans while football teams in Denmark are using large screens where fans can support the team via Zoom.

The Italian outlet also claims that according to the latest government decree, there is a possibility than spectators can be permitted inside the stadium. If seats are 45cm wide, social distancing could theoretically be followed with fans in one of every three seats.

Speaking if football league across Europe, Premier League announced that it will resume the 2019-20 season on June 17 while La Liga have been given the green light by the Spanish government to restart the campaign from June 11.

(The above story first appeared on LatestLY on May 30, 2020 06:42 PM IST. For more news and updates on politics, world, sports, entertainment and lifestyle, log on to our website latestly.com).

Comments
Tags:
Cristiano Ronaldo Juventus Serie A Serie A 2019-20 Serie A Restart Date
Comments
You might also like