Andrea Pirlo was appointed as the Juventus manager in the summer, taking over the duties from Maurizio Sarri. However, the former Bianconeri midfielder has found it hard to cope at his first major managerial job. Despite the poor showing from Juventus this season, the club's hierarchy have assured their full support to Andrea Pirlo. 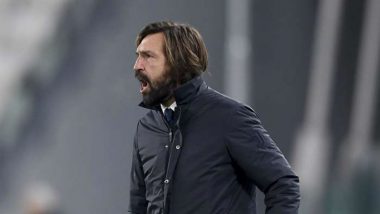 Juventus have been below their usual standards this season and risk ending the campaign without a Serie A title for the first time in a decade. The Italian giants currently find themselves seven points behind leaders Inter Milan in the team standings which has seen pressure increase on new manager Andrea Pirlo. However, the Bianconeri hierarchy have backed the former legend to take the club forward. Serie A 2020–21 Match Result: Cristiano Ronaldo Scores but Juventus Held 1–1 at Hellas Verona.

Andrea Pirlo was appointed as the Juventus manager in the summer, taking over the duties from Maurizio Sarri. But the former Bianconeri midfielder has found it hard to cope with the magnitude of his first major managerial job and could oversee the Turin giants end the season without a domestic league title after winning it for nine consecutive years. Andrea Pirlo Talks About Over Reliance on Cristiano Ronaldo After Juventus Disappointing 1-1 Draw Against Hellas Verona.

Despite the poor showing from Juventus this season, the club's hierarchy have assured their full support to Andrea Pirlo. In an interview with DAZN, Bianconeri chief Fabio Paratici said that Juventus will continue to back their manager as the former midfielder brings a lot of calmness and motivation to the club.

‘Everything is new to Pirlo, as this is his first year coaching. He is someone who brings a great sense of calm and at the same time also fires everyone up. We go forward with great conviction and trust in our capabilities,’ said the Juventus chief.

Along with a poor showing in the league, Juventus have been disappointing in the Champions League as well, losing to Porto in the first leg of their round of 16 clash. Andrea Pirlo will hope that his side can turn around the deficit in the reverse tie as the club are in danger of being knocked out of the tournament at the same stage for consecutive years.

(The above story first appeared on LatestLY on Feb 28, 2021 08:22 PM IST. For more news and updates on politics, world, sports, entertainment and lifestyle, log on to our website latestly.com).