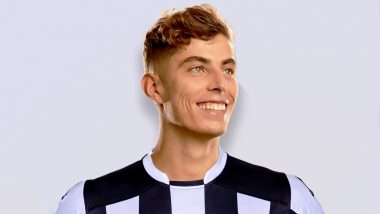 Kai Havertz has been a man in huge demand in the footballing world at the moment with several European heavyweights in contention to acquire the 21-year-old footballer’s signature. However, Premier League side Chelsea are being tipped to sign the forwards with the German also keen on joining the blues. Amid all these transfer speculations, Dutch side Heracles Almelo jokingly announced the signing of the Germany international. Bayer Leverkusen Star Kai Havertz Wants Chelsea Move.

Following Bayer Leverkusen’s exit for the Europa League in the quarter-final stage, team manager Peter Bosz was bombarded with questions regarding Kai Havertz’s future. When asked if the 21-year-old has played his final game for the club, the 56-year-old replied ‘Yes, I can exclusively announce he'll play for Heracles Almelo.’ Willian, Brazilian Footballer, Pens Emotional Letter to Confirm Chelsea Departure.

Following Bosz’s comments, the Eredivise side were quick to post a joke on their official social media account in which they announced the signing of Kai Havertz. ‘Welkom Kai’ the team from the Netherlands captioned their post.

Kai Havertz has been strongly linked with a move to Chelsea but the Blues are reluctant to pay Bayer Leverkusen’s asking price of €100 million and are hoping that they can drive it down to a figure in the region of €80m.

But the German side are adamant that they will not sell their star forward if his transfer fee is not paid in full. It is reported that Kai Havertz himself wants to play for the London club and has asked his current team to let him join the Blues.

Bayer Leverkusen director Voeller in a recent interview said that the club will not sell the 21-year-old before the end of Europa League campaign. But with the German side now knocked out of Europe, it could open doors for Chelsea to strike a deal but will have to pay the forward's release clause in full.

(The above story first appeared on LatestLY on Aug 11, 2020 06:05 PM IST. For more news and updates on politics, world, sports, entertainment and lifestyle, log on to our website latestly.com).