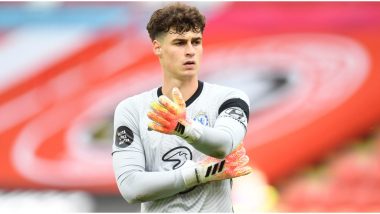 Chelsea manager Frank Lampard made a huge statement after dropping Kepa Arrizabalaga for his crucial encounter against Wolves on the final day of the Premier League 2019-20. Lampard instead started veteran Argentine goalkeeper Willy Caballero ahead of the error-prone Kepa. Chelsea need one point from their final league game to secure Champions League football next season. They can finish third if Manchester United fail to beat Leicester City in the other game on D-Day of the Premier League. Manchester City Will Always Be Grateful to David Silva, Says Manager Pep Guardiola.

Kepa, who moved from Athletic Bilbao in 2018 for a record $91.5 million making him the most expensive goalkeeper in world football, has struggled to live up to his price tag in his debut season in the Premier League. He endured a torrid run as Chelsea lost 3-5 to league champions Liverpool in their penultimate Premier League game.

Kepa dropped in favor of Caballero! Wow, huge call (and I think the right call) by Lampard. Three-man backline, as hoped. No Kante is unfortunate, worried about the Jovacic midfield against Neves and Moutinho. Would have liked Willian’s workrate, but apparently he’s injured. #CFC https://t.co/e9pVGJlnf6

Caballero Starts Ahead of Kepa

If we didn’t know already, that team underlines it: what to do about Kepa will be the biggest question hanging over Chelsea’s transfer window #CFC

"Just a choice, Kepa's had some difficult times"

Massive for Chelsea and Kepa

Just massive to drop Kepa. He's been dire - but dropping him piles the pressure on Caballero, Frank, and @ChelseaFC. Fingers, toes, and everything crossed. #CFC https://t.co/aHg0wFM4Zl

Asked a reason for dropping his first-choice goalkeeper for this crucial clash, Lampard told Sky Sports: “Just a choice, Kepa's had some difficult times so I am playing Willy.” This is, however, not the first time the Spanish goalkeeper has been dropped from the starting XI in the Premier League. Earlier in the season, Kepa was dropped for four successive league games.

He was eventually reinstated back into the starting line-up following Chelsea’s 0-3 defeat to Bayern Munich at home in the Champions League round of 16 first leg.

(The above story first appeared on LatestLY on Jul 26, 2020 10:39 PM IST. For more news and updates on politics, world, sports, entertainment and lifestyle, log on to our website latestly.com).