This was also the second time that the Belgian has won the award, making him only the third footballer to achieve this feat, after Arsenal legend Thierry Henry and former Manchester United star Cristiano Ronaldo. Phil Foden was named the PFA men's Young player of the year. 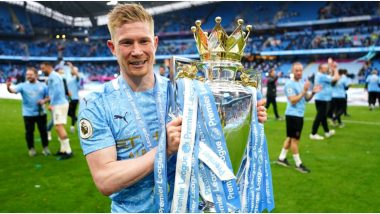 Manchester City midfielder Kevin De Bruyne on Sunday won the English Professional Footballers' Association's Player of the Year. This was also the second time that the Belgian has won the award, making him only the third footballer to achieve this feat, after Arsenal legend Thierry Henry and former Manchester United star Cristiano Ronaldo. De Bruyne has been a commanding presence in Manchester City's midfield for years now and this year too, he played a very crucial role for Pep Guardiola's side--scoring 10 goals and providing 18 assists in 40 matches. He helped City to their third Premier League trophy in four years. Sports News | Manchester City's Pep Guardiola Wins PL Manager of the Year Award for Third Time

"You want to win all the trophies with the team and then obviously if you win a trophy like this, this is probably the most important one as an individual trophy in the league," the 29-year old said.

“To be voted by your competitors who you compete with every game, that says a lot. They are the people, in my view, who know the most about the game and they are trying to get to the best level...When you have these things, you can show your kids and say, ‘Look, this is what daddy did when he was younger," De Bruyne added.

City also have been winning the League Cup for four successive years now. Unfortunately, the Belgian couldn't make an impact in the recently contested Champions League final, where he was injured in the second half with facial fractures. City lost the final to Chelsea.

(The above story first appeared on LatestLY on Jun 07, 2021 05:14 PM IST. For more news and updates on politics, world, sports, entertainment and lifestyle, log on to our website latestly.com).