There have been several reports claiming that Mbappe will sign for Real Madrid next season, with the Los Blancos confident of bringing the Frenchman to Spain. But if recent reports are to believed, there seems to a U-turn in this episode. 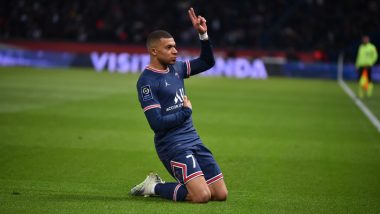 Kylian Mbappe's transfer reports and rumours have taken a U-turn according to latest developments. The Frenchman seemed to be heading towards Santiago Bernabeu in all likelihood but recent reports have claimed that the young star might reconsider his future at PSG. Mbappe was in good form once again, as he scored twice during PSG's 5-1 win over Lorient in Ligue 1 on Monday. While speaking after the match, he shared that he hasn't quite made any decision over his future. Is Kylian Mbappe Joining Real Madrid? Karim Benzema Drops Major Hint on PSG Star Linking Up With Him at Santiago Bernabeu Next Season

I haven't made my choice on the future, everyone knows that. I'm thinking, there are new elements and a lot of parameters. If I had made my decision, I would've announced it," the French forward said to Prime Video, as quoted by noted football journalist Fabrizio Romano. "I am calm, looking to make the best possible decision with my loved ones," he added.

The 'new elements' part in his interview is what has excited many, leading to speculations that he might put pen to paper on a new contract in the French capital. Journalist Daniele Riolo claimed that PSG would make the announcement of Mbappe signing a new deal, in May. "PSG president Nasser] Al-Khelaifi's only interest is knowing what Kylian [Mbappe] will do. No one will believe me, but [his new contract] will be announced in May and he will stay." Riolo, for the record, is the same journalist, who claimed that Lionel Messi will join PSG.

(The above story first appeared on LatestLY on Apr 05, 2022 05:49 PM IST. For more news and updates on politics, world, sports, entertainment and lifestyle, log on to our website latestly.com).