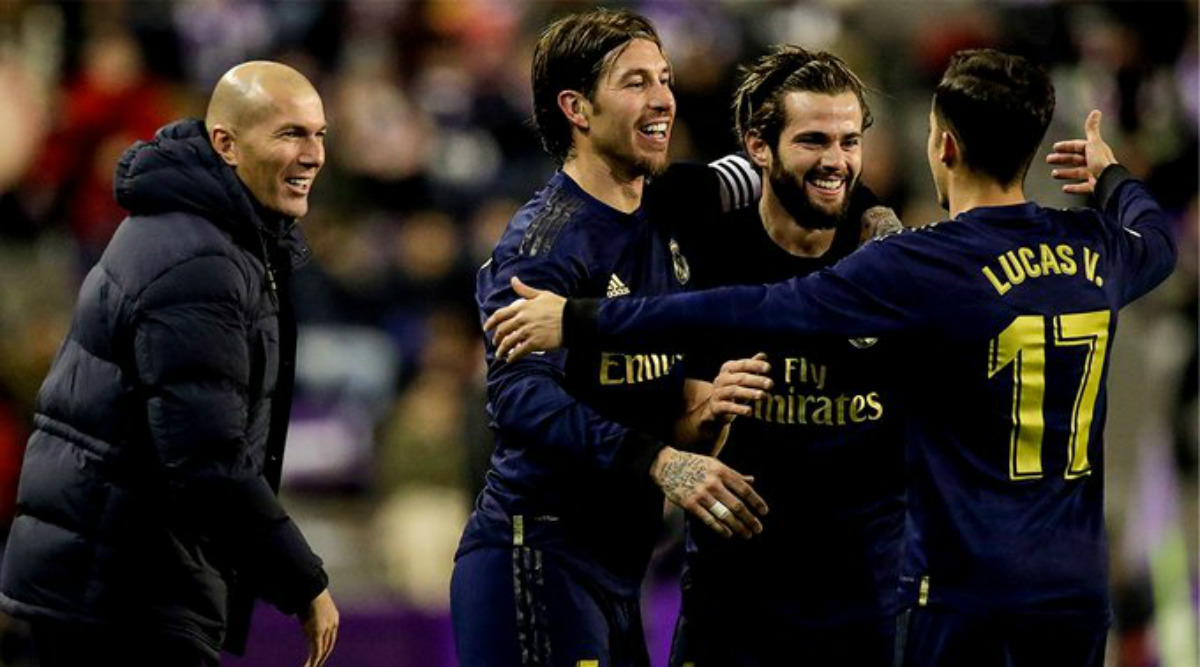 Valladolid, January 27: Real Madrid moved top of La Liga for the first time since October on Sunday after grinding out a 1-0 win away at Real Valladolid to make Barcelona pay for their surprise defeat to Valencia.

It is 16 weeks since Madrid last finished a round top of the pile and it looked like a scrappy contest at the Jose Zorilla would end goalless until Nacho headed in the winner with 12 minutes remaining.Real Madrid

Victory means Zinedine Zidane's side pull three points ahead of Barca, whose 2-0 loss away at the Mestalla on Saturday under new coach Quique Setien could prove a turning point in a nip-and-tuck title race.

Madrid now have the luxury of hosting their struggling city rivals Atletico Madrid, who are 10 points back after a goalless home draw with Leganes earlier on Sunday, with a cushion next weekend, not to mention on the back of a 19-game unbeaten run.

That streak included them drawing a game they arguably should have won at Camp Nou in December and then lifting the Spanish Super Cup earlier this month in Saudi Arabia.

As Barcelona pursue a more entertaining style of football under Setien, Madrid march on, gaining momentum with wins that based largely on solidity and a stubborn defence.

Their form has been even more impressive given the absence of key players, with Eden Hazard, Karim Benzema and Gareth Bale starting only four times together this season.

Real Valladolid, who are owned by the former Brazil and Real Madrid striker Ronaldo, are being drawn into a relegation fight after winning only one of their last 12. They stay 16th, five points above the bottom three.

Valladolid's Joaquin Fernandez was lucky not to be sent off early on for a two-footed challenge on Rodrygo, which only earned him a yellow card, despite the protests of Madrid's players.

Casemiro thought he had scored when he nodded in at the back post but VAR showed him to have been just offside and Valladolid arguably finished the first half the stronger.

Thibaut Courtois made a good save to deny Michel and then had to backpeddle to prevent Raul Garcia's cross dropping in under his crossbar.

After a scrappy opening 45 minutes, Madrid improved in the second period as the lively Rodrygo tested Jordi Masip and Benzema twice should have scored.

First, he failed to volley in an excellent Isco cross from close range and then rose high to meet Rodrygo's delivery but headed wide of the post.

Valladolid were retreating and, in the 78th minute, Madrid struck. Toni Kroos' corner was cleared back out to him and at the second time of asking, he picked out Nacho, who diverted a smart header into the far corner.

Nacho ran over to Zidane on the touchline to hug his coach.

There was a late siege as Valladolid came again in the final minutes, the stadium erupting after Sergi Guardiola tapped in at the back post. But his outstretched right foot was offside, and Madrid breathed a sigh of relief.