Since 2004, Lionel Messi has scored many wonderful goals which are difficult to describe in words. On his 35th birthday, team Latestly has found the best goals of his career so far. 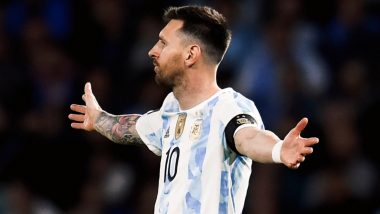 When the word magic comes to mind in football, the name Lionel Messi generally comes out of the mouth. The Argentina and Paris Saint-Germain (PSG) superstar, who turned 35 today, has made all the football fans around the world sit in awe and watch him show his magic with his left foot on the turf. Since his debut 18 years ago for Barcelona, he has taken the attacking football playing style to a new level. The little magician, who recently won the Copa America trophy for his country, ending his international trophy drought, has not only done tricks with the ball but also found the back of the net with his clinical goal-scoring ability. The seven-time Ballon D'Or winner has scored over 700 goals so far in his 18-year decorated career. On the special day of Messi's 35th birthday, here in LatestLY, we have a look at the five best goals of his career so far. Lionel Messi Images & HD Wallpapers For Free Download: Happy Birthday Messi Greetings, HD Photos in PSG Football Jersey and Positive Messages to Share Online.

5. Barcelona vs Bayern Munich (2015): Many fans believe that Jerome Boateng will never forget what Messi did to him in a Champions League match back in 2015. Receiving a forward ball from his teammate Ivan Rakitic, Messi found himself in a one-on-one situation with the then Bayern Munich defender Boateng. Before flicking the ball over Manuel Neuer for a mesmerizing goal with his right foot, Messi sent Boateng tumbling to the ground by dummying his move to cut inside before shifting it to his outside.

4.  Barcelona vs Eibar (2017): Lionel Messi scored this deadly goal during a La Liga match in 2017. After collecting the ball in the middle, he was on a solo firing run through dismantled Eibar's defence. The Argentine bamboozled two Eibar defenders by shoulder dummy before slotting home with a weaker right foot. It was outrageous. Lionel Messi Birthday Special: 5 Unbelievable Records Held by the Argentina and PSG Star.

3. Barcelona vs Real Madrid (2011): The whole football world was eagerly waiting to find out who would emerge victorious in the 2011 champions league semi-final between Real Madrid and Barcelona. It was Lionel Messi who drew the first blood in this super El Clasico at Santiago Bernabeu by weaving through Madrid defense and finishing it off in style with his right foot. This goal still haunts Real Madrid fans who were denied a European Cup final spot due to this magical solo goal.

Here is an instance of the goal:

On this day in 2011, Lionel Messi scored twice for Barcelona in their 2-0 win vs. Real Madrid in the semi finals of the Champions League. One was a brilliant Afellay assist and the other is one of the best goals he has ever scored. pic.twitter.com/n0xx5Jf273

2. Barcelona vs Athletic Bilbao (2015): Lionel Messi scored this memorable goal in the 20th minute of the 2015 Copa Del Rey final. After receiving the ball near the halfway line, he dribbled past three-four Bilbao players before cutting in on his favourite left foot and firing past the opponent's goalkeeper. A marvellous run, a dazzling dribble and a clinical finish.

1. Barcelona vs Getafe (2007): This goal defines the brilliance of Lionel Messi. A goal which can be watched again and again tirelessly. After watching this goal of Messi against Getafe, everyone will wonder how good a player can be. Among his other best goals, this goal will be an example of the very best. After receiving the ball inside the Barca half, Messi set himself off a journey, a journey of scoring arguably the most wonderful goal the world has ever seen. After nutmegging one Getafe midfielder, he started dribbling past player after player before getting past the Getafe goalkeeper and slotting it home. This was just out of the world.

Have a look at the goal:

Messi scored 56 goals in Copa del Rey, but only 3 were scored by his right foot:

These five goals of the 35-year-old superstar can easily feature in the top 50 goals of all time in football because there are not many players who have graced this beautiful game the way Messi has done.

(The above story first appeared on LatestLY on Jun 24, 2022 04:09 PM IST. For more news and updates on politics, world, sports, entertainment and lifestyle, log on to our website latestly.com).