Barcelona football star Lionel Messi is someone who generally is liked by all because of his attitude towards his fans. 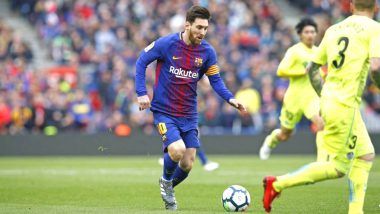 Barcelona football star Lionel Messi is someone who generally is liked by all because of his attitude towards his fans. Seldom does he refuse an autograph or a selfie to his fans. But this time, a female fan came to him and requested the Barcelona footballer for an autograph on Argentina’s team Rosario Central shirt. Messi is a keen supporter of Rosario’s rivals Newell's Old Boys and he obviously refused to sign the jersey. Messi played for Newell's Old Boys for six years before he joined Barcelona.

So getting Messi to sign Rosario Central shirt would mean asking him for an autograph on the Real Madrid jersey. Something that would never happen.T his did not go down well with the fan and she insulted him by calling him a pecho frio", which translates to "cold-blooded". The video clip of the fan was posted online. Messi was clearly not happy with the reaction but he did not pay attention and refused to even react to the comments made by the lady. Check the video online.

Talking about Messi, he was recently in the news for playing with the son of Real Betis and Mexican national team midfielder Andres Guardado during the FIFA World Cup 2018. The kid even posed for a picture with Messi and his joy knew no bounds. Barcelona is currently playing the La Liga and is featuring on the number 2 position of the table. The team will play Huesca on September 2 at the Camp Nou. Real Madrid leads the La Liga table with 6 points

(The above story first appeared on LatestLY on Aug 30, 2018 01:19 PM IST. For more news and updates on politics, world, sports, entertainment and lifestyle, log on to our website latestly.com).