The Argentine has not had a great season but that did not stop him from topping the charts as the highest-paid athlete in 2022. Ronaldo occupied the third spot with NBA and Los Angeles Laker's great Lebron James at number two. 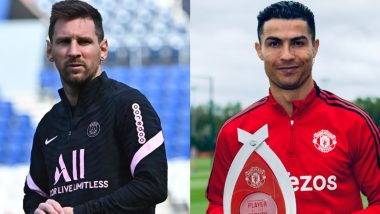 Lionel Messi has emerged to be the world's highest-paid athlete, according to Forbes. In a list released on Wednesday, the PSG star pipped the likes of Cristiano Ronaldo and Lebron James to get to the top spot. With earnings of $130 million, the forward turns out to be on the summit of the list, despite him not having a good season so far. He could only score nine goals this season in all competitions and has not been able to recreate the form, that won him seven Ballon d'Or titles while playing for Barcelona. Despite that, his endorsements, include  Adidas, Budweiser and PepsiCo. Cristiano Ronaldo Named Premier League Player of the Month for April 2022

Ronaldo placed third =, misses out on a top-two spot, with basketball great Lebron James holding the second spot. The Los Angeles Laker forward has a combined earning of $121 million, which broke his own record of $96.5 million in the NBA last year. Manchester United star Ronaldo finds himself third with earnings of  $115 million. Some of the Portugal captain's endorsements include, Nike, Herbalife and Clear shampoo. He also boasts of a massive following on social media, garnering 690 million followers on Instagram, Facebook and Twitter combined. The fourth and fifth place on this list is held consecutively by PSG star Neymar ($95 million) and NBA's Stephen Curry ($92.8 million).

According to Forbes, these earnings by the players include all the prize money as well as salaries and bonuses.

(The above story first appeared on LatestLY on May 12, 2022 06:23 PM IST. For more news and updates on politics, world, sports, entertainment and lifestyle, log on to our website latestly.com).