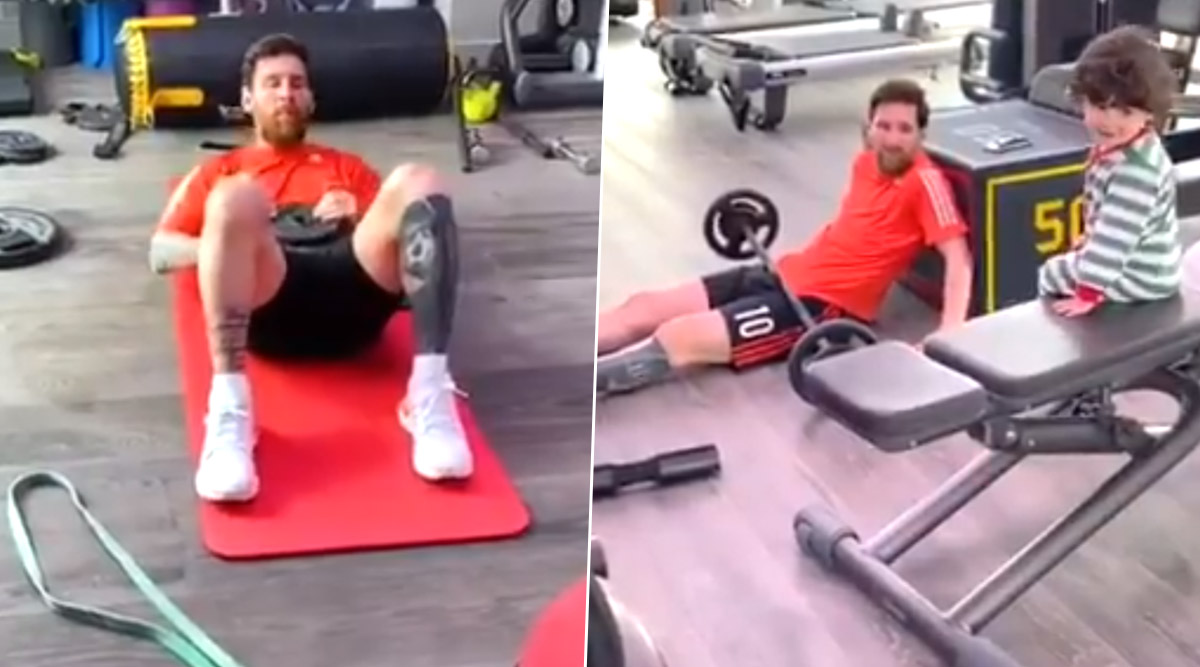 Footballing competitions around the world have been either suspended or cancelled due to the rapid growth of the coronavirus pandemic. Due to this, football teams have annulled their training sessions and have urged players to continue daily workout regime from their respective homes. Football stars have been taking to social media to share their day-to-day drills while advising fans to stay at home during this epidemic. The latest star to share his home workout routine is Barcelona captain Lionel Messi. Lionel Messi’s Crazy Nutmeg Against Manchester City Completes Five Years, Barcelona Hails The Argentine Striker (Watch Video).

In a video shared by OTRO, Lionel Messi could be seen working out in his home gym but the Argentine had a little help as he was joined by his youngest son Ciro. The two-year-old accompanied his father during a gym session as the 32-year-old looked to keep himself in shape during the coronavirus outbreak. Bruno Fernandes Mimics Cristiano Ronaldo’s Iconic ‘Sii’ Goal Celebration During Shooting Drill With Manchester United Teammate Diogo Dalot (Watch Video).

Messi is staying at home but that won’t stop him working hard 💪 With a little help of course 😉 pic.twitter.com/1TSnl3xZRy

Earlier Manchester United stars, Paul Pogba and Victor Lindelof shared a video of their home workout where the former sported a Juventus jersey with Blaise Matuidi’s name and number on the back, in order to show solidarity to his national teammate who has been tested positive for COVID-19. Lindelof also wore a Sampdoria jersey with Albin Edkal’s name on the back who has also been suffering from the virus.