Lionel Messi enjoyed another fine day at the office as Barcelona defeated Alaves comprehensively 5-1, extending their winning streak in La Liga 2020-21 to seven. The Argentina talisman brought his A-game out and scored twice from outside the box to outclass underwhelming Alaves. 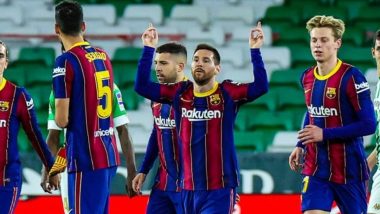 Lionel Messi enjoyed another fine day at the office as Barcelona defeated Alaves comprehensively 5-1, extending their winning streak in La Liga 2020-21 to seven.  The Argentina talisman brought his A-game out and scored twice from outside the box to outclass underwhelming Alaves. This was Messi’s record-equaling 505th Spanish league appearance for Barcelona as he matched his former teammate Xavi Hernandes’ tally. He made the occasion even more special by finding the nets not once but twice. As a result, the Catalan Giants outplayed the visitors and advanced to the second position in the team standings, displacing arch-rivals Real Madrid. Lionel Messi Goals Video Highlights: Barcelona Beat Deportivo Alaves 5-1 in La Liga 2020-21 Clash.

The visitors never really looked in the contest as Ronald Koeman’s men put up a précised show at Camp Nou. Portuguese sensation Francisco Trincao opened the scoring for Barca with a close-range goal in the 29th minute. The home team extended their lead to 1-0 as Messi smashed a sensational goal in the injury time of the first half.

Although Alaves tried to bounce back with Luis Rioja finding the nets in the 57th minute, it proved to be the solitary goal for the visitors.  Trincao and Messi smashed goals in the 74th and 75th minute to complete their brace. Junior Firpo netted the last goal of the game in the 80th minute, taking Barcelona to a 5-1 win. After the conclusion of the game, Messi expressed his delight by sharing some pictures of the game on Instagram. Have a look!

Barcelona are now at the second spot in the La Liga with 46 points in 22 games. While Atletico are still leading the table with a healthy margin of 8 points with a game in hand. The Catalan Giants will next take the field on February 17 for the UEFA Champions League round-of-16 match against PSG.

(The above story first appeared on LatestLY on Feb 14, 2021 10:41 AM IST. For more news and updates on politics, world, sports, entertainment and lifestyle, log on to our website latestly.com).