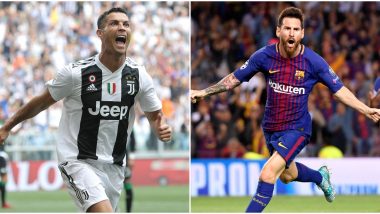 Lionel Messi has surpassed Cristiano Ronaldo to top the Top 50 athletes list. The Argentine has been named as number one in the SportsPro's 2020 list of the World's 50 Most Marketable Athletes. Cristiano Ronaldo stands on number two of the list. Lionel Messi and Cristiano Ronaldo have been compared for donkey’s years now. The football pundits and the sportsmen from other fraternity have also weighed making their choices. Despite the long-standing debate none of them has come to a concrete conclusion on who between the two is better. The fans till date have been arguing about who is the best. Cristiano Ronaldo Beats Lionel Messi to Become First Footballer to Score 450 Goals Across Top 5 European Leagues.

The SportsPro's 2020  list, they have studied, "social following, content engagement, fanbase growth over time, media value, and the performance of branded versus organic content." Considering these aspects,  Lionel Messi is number one and CR7 is on number two. Basketball legend LeBron James is on number three. Indian cricket captain Virat Kohli is on number four of the list. Bianca Andreescu, tennis player is on number five. Former Barcelona footballer Neymar Jr features on the sixth spot of the list.

Lionel Messi and Cristiano Ronaldo are obviously aware of the rivalry that the two share. The Argentine during an interview had admitted that until the time CR7 was in La Liga, he enjoyed playing against Real Madrid. Whereas Ronaldo has nothing but admiration for the six-time Ballon d'Or winner. "I really admire the career he has had so far, and, for his part, he has already said that he had trouble when I left the Spanish league because it is a rivalry that he appreciates," he had said.

(The above story first appeared on LatestLY on Oct 01, 2020 04:32 PM IST. For more news and updates on politics, world, sports, entertainment and lifestyle, log on to our website latestly.com).