Lionel Messi vs Cristiano Ronaldo Shouldn’t Even Be a Debate, Gary Lineker Hails Barcelona Superstar As Best Ever 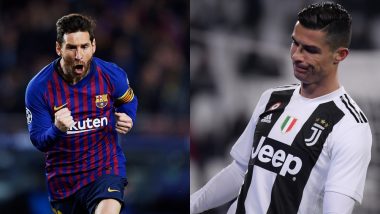 Cristiano Ronaldo vs Lionel Messi is the eternal debate in the footballing world as the two behemoths have dominated the sport for more than a decade. Now the latest person from the football community to put forward his views on this topic is former English footballer Gary Lineker. According to the 59-year-old, the debate of who is the better player is not even close as he described the Barcelona superstar as 'best ever'. Roger Federer Dethrones Lionel Messi, Cristiano Ronaldo, Tops Forbes 2020 List of World’s Highest-Paid Athletes.

Lionel Messi and Cristiano Ronaldo have won 11 of the last 12 Ballon d’Or’s between them. While the former has spent his entire career at Barcelona, the latter has enjoyed success with the likes Manchester United, Real Madrid and Juventus. But Lineker believes that the Portuguese falls short of the Argentine in terms of overall ability. ‘Better Than Cristiano Ronaldo, Lionel Messi and Neymar Jr’: Former Brazil International Edilson Makes Bold Claim.

‘People get very tribal in all sorts of ways in life, and Messi versus Ronaldo is one of them,’ Lineker told BBC Sport. ‘Often the choice seems to come down to whether you support Barcelona, Real Madrid, Juventus or whoever, which is fine - I understand that.’ He added.

‘I am a huge fan of Ronaldo too, but if you're talking about the best player ever, there shouldn't even be a debate that it is Messi. That's just my opinion, but it's not even close for me. Even for the past couple of seasons, when the Barca team has not been anything like as strong as it was in the past, his contribution has not dipped. In fact, they have been a real mess without him.’ He continued.

Lineker himself played for Barcelona during his playing days, winning the Copa Del Rey in 1988 and European Cup Winner’s Cup in 1989. He made 103 league appearances for the Blaugrana’s and was the competition’s highest-scoring British player but was later surpassed by Gareth Bale in 2016.

(The above story first appeared on LatestLY on May 30, 2020 05:33 PM IST. For more news and updates on politics, world, sports, entertainment and lifestyle, log on to our website latestly.com).