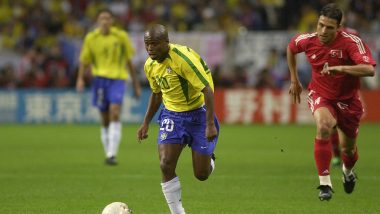 Former Brazilian footballer Edilson recently claimed that he exploits with the national team ranks him higher than the modern-day icons. The former player won the 2002 World Cup with Brazil and said that he was a better player than Neymar and his career makes him stand above the Barcelona and Juventus stars. Cristiano Ronaldo and Lionel Messi have dominated the world football for more than a decade, winning 11 of the last 12 Ballon d’Or’s between them. And Neymar is considered by many to be the heir to their throne. Cristiano Ronaldo Flaunts His Well-Chiseled Body on Social Media, Looks Ready to Train With Juventus.

The former Brazil international earned 21 caps for the national side and won a total of three domestic titles with Palmeiras and Corinthians. Edilson only had a brief spell in Europe when he played on loan at Benfica but believes that his feats with the national team and his native Brazil, gives him the edge over the three greats. Neymar Jr Shares Workout Drills With Fans to Keep Fit at Home During Lockdown (Watch Video).

During an interview with TV Bandeirantes claimed that his career and technical ability makes him better than the three modern-day greats. ‘At my best, I played better than Neymar, He needs to win the World Cup in order to be better than me.’ The 49-year-old said.

‘I have personality, and for Messi to be better than me, he also has to win the World Cup. Cristiano Ronaldo is just strength; he strikes the ball well with both feet, but I'm more skilful than him.’ The former world cup winner added.

As a part of a star-studded team, which included the likes of Ronaldinho, Rivaldo, Ronaldo Nazario, Edilson found regular game time hard to come by. In Brazil’s 2002 World Cup triumph, the 49-year-old started two games against Japan and South Korea, while came off the bench against England and China. He didn’t’ play a single minute in the final against Germany.

(The above story first appeared on LatestLY on May 15, 2020 07:12 PM IST. For more news and updates on politics, world, sports, entertainment and lifestyle, log on to our website latestly.com).