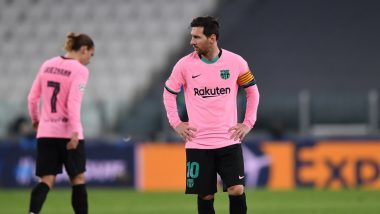 Last night Lionel Messi’s Barcelona registered a stunning win over Juventus by 2-0 win in the Champions League 2020-21. Messi not only scored a goal but also provided a stunning assist to Ousmane Dembele who netted the first goal for Barcelona within the first 14 minutes of the match. It was the Argentine who made a pass to Ousmane Dembele. This was the cross-field pass made by Lionel Messi and the remaining business was completed by Dembele The pass is said to be the 60-yard-cross field pass went viral on social media. Needless to say that the fans were all going gaga over the six-time Ballon d'Or Award winner. Barcelona and Juventus Get Into a Twitter War Over the GOAT After Lionel Messi Leads Catalans to 2-0 Against Juventus in Champions League 2020.

Messi also scored a goal from a penalty during the dying minutes of the match and took the team to 2-0. For Juventus, things went completely wrong as Alvaro Morata had scored three goals but soon the referee flagged the same and the nets were disallowed. All three goals were left off-side. Juventus remained on the score of zero. During the last minutes of the match, Messi earned a penalty and it was converted into a goal. Now, let's have a look at the assist made by Messi.

Cristiano Ronaldo missed out on the match as he was tested positive with COVID-19 once again. However, before the match Ronaldo shared a video of himself where he was seen cheering for the team.

(The above story first appeared on LatestLY on Oct 29, 2020 03:52 PM IST. For more news and updates on politics, world, sports, entertainment and lifestyle, log on to our website latestly.com).