The Reds are on the verge of winning their maiden Premier League title and first top-flight crown in 30 years. They remain 25 points clear of defending champions Manchester City and could win the title in first couple of weeks after Premier League resumes on June 17. 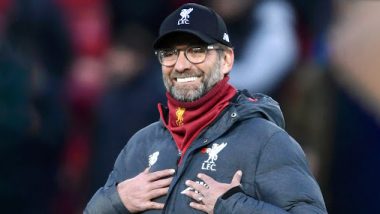 London, June 16: Former club captain Steven Gerrard believes Liverpool should build a statue for current manager Jurgen Klopp outside Anfield after he ends their league title drought. The Reds are on the verge of winning their maiden Premier League title and first top-flight crown in 30 years. They remain 25 points clear of defending champions Manchester City and could win the title in first couple of weeks after Premier League resumes on June 17.

Gerrard feels Klopp's name should be taken in same breath as that of club legends Bill Shankly, Bob Paisley and Kenny Dalglish, who saw great success during their respective times at helm. "Knowing Jurgen, he won't want to be put in that bracket. I know what he's like, he's humble and respectful," Gerrard was quoted as saying by The Athletic. Jurgen Klopp Makes Journalist Google At What Position Jose Mourinho Played During His Playing Days (Watch Video).

"When you look at the scale of the job he's done, for sure he deserves to be mentioned in the same breath as those iconic managers." Klopp took over Liverpool in 2005 when they were struggling outside the top-four in England. He has since overseen a remarkable turnaround that saw Liverpool become UEFA Champions League winners and potential Premier League winners.

"What you need to take into consideration is that when Jurgen took over Liverpool they weren't close to being the best team in the country, they weren't even in the top four," Gerrard said. "To come to Liverpool when he did, get to the amount of finals that he has, deliver the sixth European Cup and then deliver the first league title after 30 year.

"For me, someone like Jurgen should be rewarded now. It seems like in football we often wait until people get older before their achievements are fully recognised. "But I know the owners of Liverpool won't let that happen. When Jurgen delivers the league they should already be starting work on a statue of him," he added. Liverpool will look to get closer to the title when they travel to Everton in their first match of the revamped calendar on June 21.

(The above story first appeared on LatestLY on Jun 16, 2020 11:14 PM IST. For more news and updates on politics, world, sports, entertainment and lifestyle, log on to our website latestly.com).