Liverpool vs Leeds United, EPL 2020-21: Check Out Predicted Line-Ups For LIV vs LU at Anfield 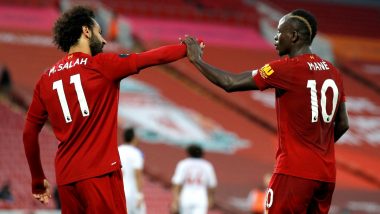 Liverpool and Leeds are kicking off their EPL 2020-21 campaign at Anfield. The Reds would be wanting to defend their Premier League title. The two teams came across each other in the Community Shield Tie and it was Leeds who walked away with the last laugh. In this article, we shall bring to you the predicted line up for the match, but before that, let’s have a look at the preview for LIV vs LU. The home team does not have too many fitness issues to bother about. Xherdan Shaqiri and Jordan Henderson are coming back from injuries. Kostas Tsimikas is been recovered from COVID-19. Liverpool has been unbeaten in the opening games of the Premier League fixture since the last seven years. LIV vs LU Dream11 Prediction in Premier League 2020–21: Tips to Pick Best Team for Liverpool vs Leeds United Football Match.

Talking about the visitors they too do not have many injury concerns. The only play who would miss out on the game is Adam Forshaw. Their new signings for the season, Robin Koch and Rodrigo Moreno have been in the news. Marcelo Bielsa, the manager of Leeds United said the two of them were fit but it is very unlikely if the two will start in the game. The team has never lost their first game of a Premier League season, winning five and drawing seven. Now let's check out the predicted line-up for both sides.

Mohamed Salah would be one player to look out for. Both the teams are expected to go with 4-3-3 formation. The fans feel that it is Liverpool who will walk away with a 2-0 win. The match will begin at 10.00 pm IST.

(The above story first appeared on LatestLY on Sep 12, 2020 03:18 PM IST. For more news and updates on politics, world, sports, entertainment and lifestyle, log on to our website latestly.com).