'Indiranagar ka Gunda' fad is one thing on the Internet that is catching up quite fast. Many have been posting pictures on social media featuring the goon in the snaps. Now, Manchester City has also joined the bandwagon and has put up a hilarious post featuring their midfielder İlkay Gundogan. 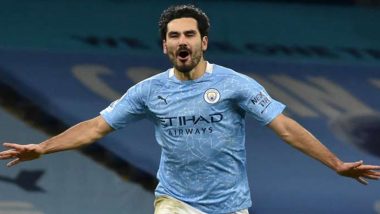 Manchester City also posted a picture on social media of their midfielder  İlkay Gundogan and posted a hilarious caption to it. "Indiranagar has a new Gunda, but we have Gundo #IndiranagarKaGunda," read the caption on the snap. they also used a wink emoji alongside the caption of the snap. A few days ago, Venkatesh Prasad has also joined the internet fad and labelled Aamir Sohail,  'Indiranagar ka Gunda'.

Now, let's have a look at the post by Manchester City below:

Manchester City has qualified for the UEFA Champions League 2020-21 semi-finals. City had won the game 2-1 against Borussia Dortmund. Riyaz Mahrez had scored a goal at the 55th minute of the game. Phil Foden was the one who scored the second goal in the game. This is the first time that Manchester City will make an appearance for the first time in the tournament with Pep Guardiola.

(The above story first appeared on LatestLY on Apr 15, 2021 10:23 AM IST. For more news and updates on politics, world, sports, entertainment and lifestyle, log on to our website latestly.com).