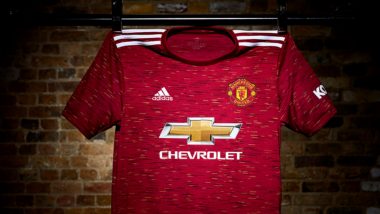 Manchester, Aug 4: Premier League giants Manchester United on Tuesday unveiled their new home kit for the 2020/21 season. Top stars like Bruno Fernandes and Marcus Rashford among others were pictured modelling for their latest jersey.

United also announced that players will wear the latest kit in their Europa League Round of 16 second leg clash against Austrian football club LASK at Old Trafford.

A post on club's Twitter handle read: "The full kit will be worn for the first time on Wednesday in our #UEL last-16 second leg tie against LASK."

United won the first leg 5-0 away from home before coronavirus stoppage in March and are just 90 minutes away from securing a place in the next round.

As for LASK, they need a miracle to overturn their deficit against an in-form United side, which recently finished third in the Premier League.

Mid-fielder Fred, however, urged the team to finish off the job at home and warned against complacency so that 'nothing goes wrong' in their pursuit of another European title.

"We've got a 5-0 lead against LASK, but they're a good team and we need to be careful," Fred was quoted as saying by club's official website manutd.com.

"We have to manage the game, looking to score and win. That way there'll be no risk. We've got a big advantage which could be relaxing for us but as I said, we need to always have a good mentality and look to win the game, to make sure nothing goes wrong.

"I hope I can come up with some big performances in the upcoming Europa League games. I want to win the trophy, we're close and we'll give our all to be (Europa League) champions," he added.

(The above story first appeared on LatestLY on Aug 04, 2020 04:12 PM IST. For more news and updates on politics, world, sports, entertainment and lifestyle, log on to our website latestly.com).