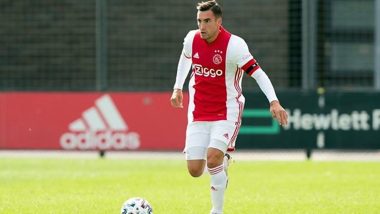 Manchester United are in the transfer market looking for a new left-back to give competition to Luke Shaw in that position. The Red Devils have identified Jadon Sancho as their major summer signing, but with Borussia Dortmund, unwilling to budge on their asking fee, the Premier League side are looking to strengthen other positions in the squad. And after a poor performance in their opening domestic league game, are looking to add reinforcement to their defence. Carabao Cup 2020-21: Juan Mata, Marcus Rashford, Mason Greenwood Score in Manchester United's 3-0 Win Over Luton Town.

According to a report from The Sun, Manchester United are monitoring the situation Ajax defender Nicolas Tagliafico. The Argentine, who still has two years left to run on his current contract, could be available for around €25 million (£23m/$29m). The 28-year-old has been a crucial part of the Dutch team in their recent rise in world football and will surely improve the Red Devils.

Manchester United have identified the left-back position as one of the weak links in the team and are trying to strengthen that position. The Premier League side are in talks with Porto defender Alex Telles but are looking at Nicolas Tagliafico in case the Porto deal does not goes through. Telles is in the final year of his contract with the Portugal side.

Manchester United were also in the race to sign Sergio Reguilon from Real Madrid with the defender even agreeing on personal terms with the Red Devils. But as the two clubs were unable to reach on an agreement on a ‘buy-back’ clause, the Spaniard joined Tottenham Hotspur.

Manchester United have already signed Donny Van De Beek from Ajax, who opened his account for the Red Devils in the opening fixture against Crystal Palace. But his strike off the bench went in vain as the record Premier League champions were defeated 3-1 at the Old Trafford.

(The above story first appeared on LatestLY on Sep 23, 2020 11:22 PM IST. For more news and updates on politics, world, sports, entertainment and lifestyle, log on to our website latestly.com).