Fans will be allowed back into stadiums after December 2 in Britain after UK Prime Minister Boris Johnson announced new COVID-19 measures on Monday. Fans will be welcomed back in Tier 1 and Tier 2 areas post the nationwide lockdown with clubs allowed to open stadiums to a minimum number of fans. Those in Tier 3 will, however, remain locked out. 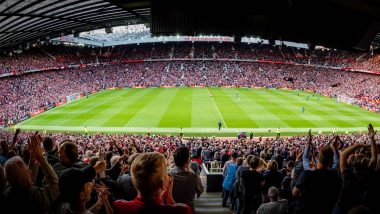 In what comes as a major boost for sports fans in Britain, a limited number of fans will be allowed to attend indoor and outdoor events from December 2 onwards as Prime Minister Boris Johnson announced new coronavirus measures on Monday. The UK PM, reading out the new COVID-19 measures, said fans in Tier 1 and Tier 2 areas will be allowed to attend events, which includes the English Premier League and other sporting events once the national lockdown ends on December 2. The announcement means Manchester United vs Paris Saint-Germain could be the first game attended by fans since March. Tottenham Loses More Than $85 Million, Debt Climbs Due to COVID-19 Pandemic.

"In Tiers 1 and 2 spectator sports and business events will be free to resume inside and outside with capacity limits and social distancing, providing more consistency with indoor performances in theatres and concert halls,” the British Prime Minister said on Monday. "We'll also strengthen the enforcement ability of local authorities, including specially trained officers and new powers to close down premises that pose a risk to public health."

Those in Tier 3 will, however, continue to remain locked out of stadiums with the PM only announcing restrictions only for Tier 1 and Tier 2 fans. The breakdown of the tiers will be only announced on Thursday.

English Premier League, other football matches and other sporting events have been taking places behind closed doors since the outbreak of the coronavirus pandemic in March. Fans have also been forced to watch their favourite teams play from home. But the limited lifting in restrictions for sports and business-related events will allow the return of fans back into stadiums.

Reports in the British media have stated the club will only be able to welcome a maximum of 4,000 people or 50 per cent capacity limits in Tier 1, which also drops to 2,000 or 50 percent of capacity for indoor venues. In Tier 2, it has been reported a maximum of 2,000 fans or 50 percent of capacity for outdoors and 1,000 fans for indoors will be allowed. The official announcement is, however, be made on November 27 (Friday).

Manchester United, who are set to host Paris Saint-Germain in their penultimate UEFA Champions League Group H match a day after the lockdown ends, could become the first club in England to welcome fans into the stadiums. Among the Premier League clubs, only Brighton and Southampton who are in Tier 1, will be allowed to let in a maximum amount of fans in the stadiums.

(The above story first appeared on LatestLY on Nov 24, 2020 01:05 AM IST. For more news and updates on politics, world, sports, entertainment and lifestyle, log on to our website latestly.com).