The Dutch defender is one of Europe's most exciting talents and Chelsea have reportedly contacted Juventus over signing the player. De Ligt earlier had stated that he would be keen on signing a new deal at Juventus. 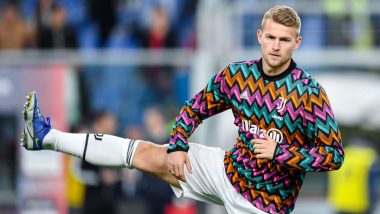 Chelsea have reportedly shown interest in signing Matthijs de Ligt from Juventus. The Blues have lost Andreas Christensen and also looks set to miss out on signing Jules Kounde from Sevilla. Also, Anthony Rudiger left them to join Real Madrid. With an urgent need for central defenders, the London club is said to have turned their eyes to de Ligt, who is one of the finest young prospects in Europe. A report in Goal claims that Chelsea have contacted Juventus over the signing of de Ligt. Mohamed Salah Transfer News: Egyptian Star Could Reportedly End Up Leaving Liverpool This Summer

The Dutch defender had earlier said that he is in talks over a new contract at Juventus. He reportedly said, "Negotiations are ongoing at the moment and when the time comes I will decide whether to extend or look elsewhere. I always look at what is best for me in terms of the sporting project...Two consecutive fourth-place finishes are not enough, we have to make progress in that direction because these are disappointing results." Chelsea have not made any formal offer yet to sign the player.

The Bianconeri are keen on having the player stay back in Turin, with his current contract running out in 2024. Should Chelsea end up signing him, they would have to break the bank with the player's release clause being a massive €120 million.

(The above story first appeared on LatestLY on Jun 25, 2022 01:00 PM IST. For more news and updates on politics, world, sports, entertainment and lifestyle, log on to our website latestly.com).