Mauricio Pochettino Could Be Sacked as Manager After PSG’s Exit From French Cup 2021-22: Reports

There have been reports doing the rounds that Pochettino could be sacked as PSG manager after this season or even as early as by March after the French giants crashed out of the Coup De France with a loss to Nice. 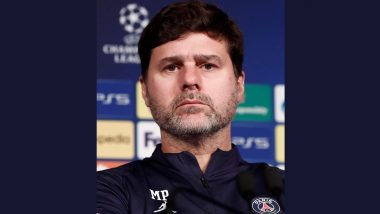 Mauricio Pochettino's reign as PSG manager is under threat with several reports doing the rounds that he would be sacked after the French giants failed to progress in the Coup De France. Pochettino's PSG were handed a defeat by Nice on penalties in the Round of 16 clash and the Argentine's only hope of remaining in the French capital would be their performance in the Champions League. According to a reports, Pochettino's PSG future is in doubt even beyond March.  Lionel Messi Fans Compile Disastrous Moments from PSG vs Nice, French Cup 2021-22 Match, Netizens Want Argentine to ‘Adapt His Game’ (Watch Video)

PSG have had a blockbuster summer transfer window this season where they signed the likes of Lionel Messi, Sergio Ramos and Gianluigi Donnarumma amongst others. They are currently in very good form in Ligue 1, where they sit 11 points clear at the top of the table. However, an untimely exit from the French Cup despite having star players like Kylian Mbappe and Lionel Messi in the squad has raised doubts about Pochettino's future in Paris and it seems only a good performance in the Champions League can only put to rest such reports. PSG have never won the Champions League and they face Real Madrid in the round of 16, the first leg being on February 16.

Pochettino took up the reigns as PSG's manager in 2021 when Thomas Tuchel was sacked by the French side. If he were to be removed as manager, then the Argentine would once again be a top favourite to become Manchester United's new head coach next season. Ralf Rangnick is currently in charge of Manchester United in an interim capacity and the Red Devils would be in the lookout for a permament option next season.

(The above story first appeared on LatestLY on Feb 02, 2022 07:53 PM IST. For more news and updates on politics, world, sports, entertainment and lifestyle, log on to our website latestly.com).