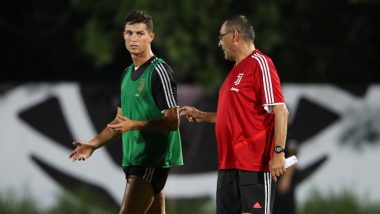 Last night turned out to be quite a dejection for Juventus as they lost the finals of the Coppa Italia 2019-20 to Napoli on penalties. Obviously things didn’t go as per plan for the Bianconeri and the fans slammed Cristiano Ronaldo for not stepping up to the occasion. Now, Juventus manager Maurizio Sarri also took a dig at CR7 and said that he is looking good and is in a good shape like Paulo Dybala and Douglas Costa but is lacking a bit of a sharpness to do what works the best for him. This is the first time in CR7’s career that he faced two consecutive defeats. Cristiano Ronaldo Slammed for Not Stepping Up to Take a Penalty During Shootout in Coppa Italia 2019–20 Final Defeat Against Napoli.

The last time they lost the Coppa Italia to Lazio. While speaking to one of the channels Sarri said that he also is upset with the defeat just like the players are. "I didn't say much to the players after the game. I was angry and disappointed just like them, so at these moments it's best to stay silent. We'll talk better tomorrow morning," he said after the game. He also admitted that they are missing a few players and the fitness of the players is not to an optimum level. The two teams saw a 0-0 draw by the final whistle and as per the new rule, the match went into penalties.

Napoli won the shootout 4-2. Juventus striker Paulo Dybala and Danilo Luiz da Silva missed penalties for the side. CR7 was yet to take a penalty as he was the fifth one. Coming to Serie A 2019-20, the Bianconeri stands on number one with 63 points.

(The above story first appeared on LatestLY on Jun 18, 2020 04:39 PM IST. For more news and updates on politics, world, sports, entertainment and lifestyle, log on to our website latestly.com).