The Egypt star is currently the highest scorer in the Premier League with 22 goals to his name. He also leads the assists chart, having set up goals 13 times. 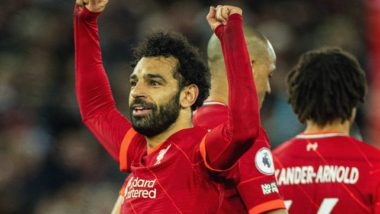 Mohamed Salah, who has had a great season so far, has claimed that he is the best player in the world in his position. The Liverpool star has kept alive his side's dream for a quadruple this season and even though the Reds might miss out on the Premier League title, they have a great chance at claiming the FA Cup and also the Champions League title, when they face Real Madrid in the final of the premier European tournament. Manchester United Set to Complete Frenkie de Jong Transfer From Barcelona

The Egyptian recently was named the 2022 FWA Footballer of the Year. While speaking to beINSports, he said, "If you compare me with any player in my position, not only in my team but in the world, you will find that I am the best." He also added, “I always focus on my work and do my best and my numbers are the best proof of my words. I like to always create a new challenge for me, to work in a different way and to make a difference and that is my duty."

Salah would once again have a crucial role to play for his side as they chase Champions League glory this season. But it would not be easy against a side like Real Madrid, who had earlier defeated Liverpool 3-1 in the 2018 final. Salah himself had to be taken off after sustaining a shoulder injury and the Egyptian would have revenge on his mind. "I remember the last final against Real Madrid as if it was yesterday. We are well prepared and hopefully, we can take our revenge in the next final."

(The above story first appeared on LatestLY on May 12, 2022 04:45 PM IST. For more news and updates on politics, world, sports, entertainment and lifestyle, log on to our website latestly.com).