The Egypt star would be entering into his final year at Liverpool with talks over a new contract looking to be in a complicated situation. Salah had earlier stated that he would remain at Liverpool for another year. 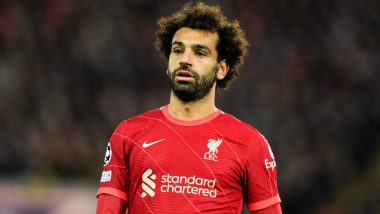 Barcelona have reportedly shown interest in signing Mohamed Salah next season. The Catalan giants, according to Mirror have promised Salah that they would sign him as a free agent after his Liverpool contract runs out. The Egyptian forward runs out of contract next season at Liverpool and Barcelona would then have him as a free agent, if reports are to be believed. Salah had earlier stated that he would be seeing out his contract at Anfield amidst complications arising over a new deal. Hungary 1-0 England, Nations League: Dominik Szoboszlai's Penalty Sinks Three Lions (Watch Goal Video Highlights)

"I don't want to talk about the contract now, I'm staying next season for sure, that's clear," the star forward had said, ahead of the Champions League.

Salah drawing interest from Barcelona comes as a new jolt to Liverpool, who haven't been able to have Salah continue what began as a five-year deal at Anfield. The Reds are already on the verge of losing Sadio Mane after the ace forward made his intention to leave the club very clear. He has been rumoured to join Bayern Munich.

Barcelona are really close to signing Bayern star Robert Lewandowski after the Polish star stated that his time with the German champions are over.

(The above story first appeared on LatestLY on Jun 05, 2022 05:25 PM IST. For more news and updates on politics, world, sports, entertainment and lifestyle, log on to our website latestly.com).