NorthEast United are another club that have bitten the dust in important games. They have one of the best set of fans base despite a trophy drought. Ahead of the NEUFC and Mumbai City game, we take a look at the players to watch out for in the game. 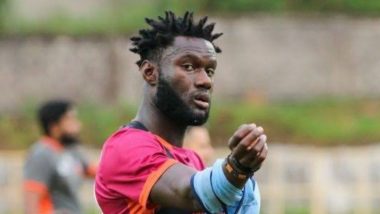 Day 2 of the Indian Super League has two quality clubs locking horns as NorthEast United FC take on Mumbai City FC. Sergio Lobera returns to the Indian Super League after an unceremonious exit. The Spaniard had a fall out with the Goa management and was subsequently fired. Mumbai City are certain to adopt an attacking brand of football this season under Sergio Lobera but focus must not shift from their defence which was poor last season. NorthEast United are another club that have bitten the dust in important games. They have one of the best set of fans base despite a trophy drought. Ahead of the NEUFC and Mumbai City game, we take a look at the players to watch out for in the game. NEUFC vs MCFC ISL 2020-21 Match 2 Preview: NorthEast United FC Take on Mumbai City FC at Tilak Maidan in Vasco.

The tall dominating centre-half is Sergio Lobera’s most trusted man in defence. He is very good in the air and NEUFC will have to do well to beat him with the crosses from out wide. He is a threat on the set-pieces which is another dimension to his game.

The former Goa skipper has his game modelled on someone like Patrice Evra where he ventures forward for the majority of the time. With him on the pitch, the strikers can expect some pin point crosses. NEUFC vs MCFC Head-to-Head Record.

33-year-old Andam Le Fondre is on loan at MCFC and with experience in playing in the EPL under his belt, he can be more than handful for the defenders in the league. He will be making those runs behind the last man for Mumbai and it is up to the midfield to make good use of him.

NEUFC have a habit of bringing in big names in the striking department and the latest in the list is Idrissa Sylla. The 6 feet 2 striker is a physical presence in the opponent box and his match up with Mourtada Fall could well decide the outcome of the game. NEUFC vs MCFC Dream11 Team Prediction in ISL 2020–21: Tips to Pick Goalkeeper, Defenders, Midfielders and Forwards for NorthEast United FC vs Mumbai City FC in Indian Super League 7 Football Match.

Dynamic midfielder Britto PM is an action packed player who will cover various position for NEUFC. He likes to keep the ball ticking and get his attackers the supply. He was playing for Mohun Bagan last season and makes his ISL debut this evening.

Mumbai City FC will dominate play right from the onset but like every Sergio Lobera’s side, they are highly susceptible to counter.

(The above story first appeared on LatestLY on Nov 21, 2020 03:35 PM IST. For more news and updates on politics, world, sports, entertainment and lifestyle, log on to our website latestly.com).