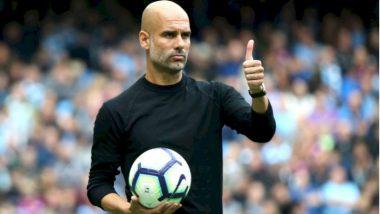 "It is a product of the mutual trust and respect that exists between him and the entire Club.  It also goes to the stability and creativity at the heart of our football operations," said the Chairman. He also hoped that the news would bring a smile on the faces of the fans at Manchester City. Pep has been with Manchester City for 11 seasons now and the team has collected 29 major trophies. Their win percentage so far has been 73.87 per cent. Guardiola also said that having a kind of support that Manchester City offers him is the best thing the manager can have.

“The challenge for us is to continue improving and evolving, and I am very excited and about helping Manchester City do that," he said in the press release. City has won the FA Cup once and the League Cup three times since Guardiola’s arrival in 2016.

(The above story first appeared on LatestLY on Nov 19, 2020 06:58 PM IST. For more news and updates on politics, world, sports, entertainment and lifestyle, log on to our website latestly.com).