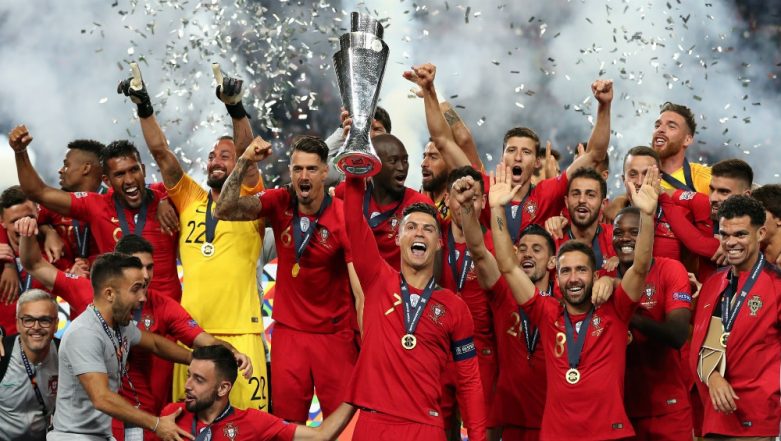 Lisbon, June 10: Portugal took home the Nations League trophy with a 1-0 victory over The Netherlands in the finals in Oporto without needing the goal-scoring help of team captain and top striker Cristiano Ronaldo.

On Sunday, Ronaldo ended the match without scoring and it was Goncalo Guedes who notched the winning tally for the Portuguese in the 60th minPortugal Beat Netherlandsute, reports Efe news.

Portugal came onto the pitch with a clear offensive strategy with Berardo, Guedes and Ronaldo in the forward positions on the hunt for goals and glory, and the team - coached by Fernando Santos - masterfully controlling their rivals' passing game.

A patient and careful Holland, without a top goal-scorer and a notch below the scrappy 2016 European champions, couldn't quite measure up to the active Portuguese, but played well nevertheless except toward the end, when things began to fall apart a bit for them.

After getting their bearings over the first 10 minutes of play with three attempts that were saved by Cillessen, the Dutch goaltender, the Portuguese began to bear down on their rivals and manufactured their best chance of the first half in the 31st minute, when Ronaldo knocked a header toward the net only to have it trapped by the netminder and be whistled out of play.

The Portuguese, however, did a prime job of limiting the Dutch scoring chances, allowing only one good shot on goal during the entire match, a header by Memphis Depay which Rui Patricio easily handled.

Just before the break, Portugal began firing off a seemingly endless series of fruitless shots on goal without managing to connect, showing their impatience to get on the board before heading to the locker room.

It wasn't until the 60th minute that Guedes sealed the deal with a shot from the side that Cillessen, despite stretching to the max, just couldn't stop.

Holland tried to bounce back five minutes later, pushing toward the Portuguese area and firing their first shot on goal but running up against Rui Patricio, who was there to fend off Memphis's attempt.

Guedes was taken out in the 75th minute and replaced with Rafa Silva, who gave the Portuguese a little more speed but did nothing to up the score. Meanwhile, the orange squad was fighting hard to set up counterattacks and break down Patricio's barrier.

The match, during which neither side let themselves get carried away by negative emotions, showed its only tense moments in the 83rd minute when the Dutch demanded a penalty that the ref did not see.

Overall, the home team controlled the ball for just 42 per cent of the time but fired 12 shots on goal to Holland's one.