Premier League 2021-22 Fixtures: From Chelsea to Manchester United, Here’s Who the Big Six of EPL Would Face in Their Opening Matches

The Premier League schedule for the 2021-2022 season was announced on Wednesday. This season would also witness some blockbuster box-office clashes, fierce derbies and memorable goals and moments. 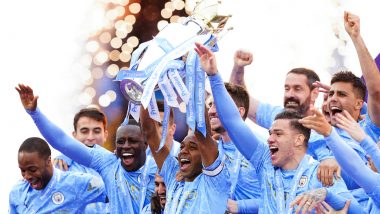 The Premier League fixtures was announced on Wednesday and already, there has been a lot of discussion around the derbies and potential blockbuster clashes in the next season. The last edition saw Manchester City win the league title, their fifth in total and they did it by opening up a 12-point margin with second-placed local rivals Manchester United. City had gotten off to a difficult start to the season, which was their worse in 10 years and yet they bounced back in dominating fashion to win the title. Of the Big Six in the Premier League, only Arsenal had the worst performance, finishing eighth with 61 points, just one short of London rivals Tottenham Hotspur, who would be participating in the inaugural edition of the UEFA Conference League. EPL 2021-22 Schedule in IST, Free PDF Download: Get Premier League Fixtures, Time Table With Match Timings of England's Top-Tier Football Division

This season too promises to be a cracker, with some memorable moments, jaw-dropping goals and historic comebacks. Let us take a look at who the Big Six would be facing in the opening round of fixtures, starting August 14, Saturday.

1) Tottenham Hotspur vs Manchester City: Pep Guardiola's side have been handed a tricky start to their Premier League title defense with them having to make a trip to the White Hart Lane to face Spurs on August 14. The Champions League final defeat would sting a little bit but the defending champions would still be the favourites. Spurs, on the other hand, are also one of the most unpredictable sides in the Premier League. Having fired Jose Mourinho towards the end of the season following a string of poor performances, Spurs appointed Ryan Mason as interim manager for the remainder of the season. Recent rumours suggest that they are in talks with bringing former Roma manager Paulo Foncesca to London and if this move comes through, it would be interesting to see how the Portuguese fares in the Premier League.

2) Manchester United vs Leeds United: Manchester United, like their local rivals Manchester City, would have a tricky test when they go up against Leeds United at home in their opening round of fixtures on June 14. Ole Gunnar Solkjaer's men had a disappointing end to their campaign last season wherein they conceded the Europa League final to Spain's Villarreal and they would sincerely hope to start their new season on a high to forget about that loss. But Leeds, under Marcelo Bielsa, is one of the most exciting and unpredictable sides in the competition. They have enough in their ranks to possess a strong challenge to Manchester United, who might have the home advantage.

3) Chelsea vs Crystal Palace: Thomas Tuchel's inaugural season at Chelsea would always be a memorable one, with the Blues winning the Champions League, defeating Guardiola's City in an epic final. Boosted by this victory, they would take the field at home against Crystal Palace in their first match of the 2021-2022 Premier League on August 14. It would be a relatively easy fixture for Tuchel's side while as for Crystal Palace, who are without a manager at the moment, it can be a bit difficult fixture to begin with. Rumours suggest that Frank Lampard could be making a comeback to football management with Crystal Palace. If this happens, will it then be a memorable homecoming for the former Chelsea boss?

4) Norwich City vs Liverpool: Former Premier League champions Liverpool, who too like City bounced back well after a poor start, would find themselves facing a tricky opponent in Norwich in the opening round of fixtures on August 14. Tricky because Norwich just secured promotion to the Premier League by winning the EFL championship. But their poor performances from the last time they played in the Premier League would haunt them. However, they are more than capable of springing up a surprise.

5) Brentford vs Arsenal: Eighth-place finish, top players out of form and no European football for the first time in 25 years, Arsenal would have quite a task in hand when they take on newcomers Brentford in an away match in the season's first Premier League fixture on August 14. Mikel Arteta's side are in for a big summer where they would try and get in reinforcements and new signings to bolster their squad ahead of the Premier League next season. Brentford on the other hand, would be confident of their form, especially after winning the play-offs to secure a move to the Premier League. It surely promises to be an interesting clash.

However, with all being said, the new season of the Premier League would act as a clean slate for all the sides, who would be heading into the competition with expectations but without pressure. As unpredictable as football can be, any side has the capability to defeat any other team on a given day. Also, some these fixtures could potentially change owing to broadcast reasons.

(The above story first appeared on LatestLY on Jun 16, 2021 08:31 PM IST. For more news and updates on politics, world, sports, entertainment and lifestyle, log on to our website latestly.com).