PSG vs Brest match in Ligue 1 will be played at the Parc des Princes Stadium in Paris, France on January 16, 2021 (Sunday). The league clash has a scheduled start time of 01:30 am IST (Indian Standard Time). 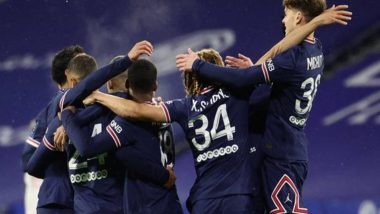 Paris Saint-Germain have managed just one draw in their last five games and this has put pressure on manager Mauricio Pochettino to reverse the negative trend. Despite the slip-ups, the French giants still sit comfortably on top of the French league with an 8 point lead over second placed Nice. The kind of dominance they enjoy in Ligue 1 is matched perhaps just by Bayern Munich in Germany but Nice and Marsellie are catching up soon. Opponents Brest have done well this term and sit clear from the drop zone. With 25 points from 20 games, they are 13th in the league and could break into the top 10 with a string of wins. Lionel Messi Set To Miss PSG vs Brest Ligue 1 2021–22 Fixture.

Lionel Messi continues his post COVID recovery and will not be part of the match day squad for PSG. Mauro Icardi is set to lead the attack with Kylian Mbappe and Angel Di Maria on either flank. Neymar and Julian Draxler are on the injury list for the hosts and their return date is not yet confirmed. The PSG midfield consisting of Ander Herrera and Marco Verratti looks strong and Brest could be devoid of majority of the possession in the game.

Haris Belkebla is away at AFCON for Brest while Sebastien Cibois and Romain Del Castillo are out injured. Brendan Chardonnet and Christophe Herelle have a tough job in defence as they come up against one of the best attacks in Europe. Lucien Agoume is known to break forward from midfield but PSG could man mark him out of the contest. Fede Valverde Mocks Lionel Messi by Copying His Popular Goal-Scoring Celebration After Snatching El Clasico 2021-22 Win (Watch Video).

PSG vs Brest match in Ligue 1 will be played at the Parc des Princes Stadium in Paris, France on January 16, 2021 (Sunday). The league clash has a scheduled start time of 01:30 am IST (Indian Standard Time).

Fans in India can watch the PSG vs Brest Ligue 1 match live on their television sets through Viacom18 channels as they are the official broadcasters of Ligue 1 2021-22 matches in India. VH1 are likely to telecast the game on TV.

Football fans in India can also live stream the PSG vs Brest Ligue 1 2021-22 match on the Voot app and website. JioTV would also provide live streaming of this match in India. PSG have won their last eight games against Brest and they remain on course to add yet another win in the streak. Kylian Mbappe is the favourite to bag a brace for the Parisians.

(The above story first appeared on LatestLY on Jan 15, 2022 05:50 PM IST. For more news and updates on politics, world, sports, entertainment and lifestyle, log on to our website latestly.com).