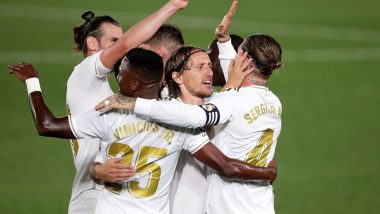 The La Liga 2019-20 champions have announced for the Champions league 2019-20 tie against Manchester City. The match will happen at the City of Manchester Stadium. Ahead of the match, Zinedine Zidane’s team has announced the 24-member squad for the match. The team manager has left out Gareth Bale who has been away from the squad for quite a long time now. This is the second leg of the tournament where Manchester City has the 2-1 lead over the current La Liga champions. The Round of 16 match will happen on August 8, 2020. Gareth Bale’s Relationship With Real Madrid Boss Zinedine Zidane Hits an All-Time Low: Reports.

Talking about Gareth Bale he played for the Los Blancos earlier this June when the team plated against Mallorca. Post this he did not feature in seven of the league games. The Real Madrid forward is having quite a tough season and has encountered the worst performance as he has scored only three goals in all competitions. A few netizens were upset with the decision of leaving out Bale. FormerManchester City youngster Brahim Diaz and ex-Chelsea star Eden Hazard are also included in the 24-man travelling squad for the match. Now let's have a look at the squad below:

Real Madrid captain Sergio Ramos has been rested from the upcoming game. He will be on the tour to Etihad Stadium but will not be included in the playing XI and will be watching the match from the sidelines. This would be quite a tough game for the Los Blancos as they have never overturned a deficit after losing the first leg at home in the previous four instances. The match will begin at 12.30 am IST.

(The above story first appeared on LatestLY on Aug 06, 2020 09:44 AM IST. For more news and updates on politics, world, sports, entertainment and lifestyle, log on to our website latestly.com).