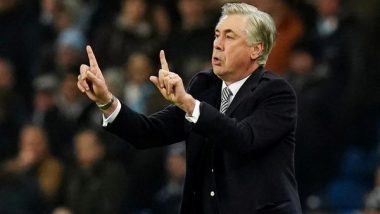 Madrid, March 31 : Real Madrid confirmed on Wednesday that coach Carlo Ancelotti has tested positive for Covid-19.The club gave the news in a one-line communique on their official website, without saying the condition of the 62-year-old coach, who apparently took a test after suffering symptoms compatible with the virus.

Given the nature of his job, however, it is uncertain whether this will happen, and it is likely that he will miss Real Madrid's La Liga match away to Celta Vigo on Saturday and could also miss their Champions League quarter-final first leg away to Chelsea next week, reports Xinhua. Real Madrid will be without Eden Hazard for those games after the Belgian winger underwent an operation to try and clear up a long-standing ankle issue, while Luka Jovic and Isco, neither of whom have counted much for the coach this season, are also doubts with muscle problems.  Lionel Messi Transfer News: Barcelona President Joan Laporta ‘Not Considering’ Argentine’s Return To Camp Nou

The regulations for people infected with Covid-19 changed in Spain on Monday and in theory, if he only shows light symptoms or is asymptomatic, Ancelotti does not have to remain in quarantine for seven days and could work as long as he maintains social distance and wears a protective face-mask, reports Xinhua.

(The above story first appeared on LatestLY on Mar 31, 2022 10:29 AM IST. For more news and updates on politics, world, sports, entertainment and lifestyle, log on to our website latestly.com).