Real Madrid will be the favourites to clinch the UEFA Super Cup 2022 title by beating a weak Frankfurt side who were recently decimated 1-6 by Bayern Munich. Scroll down below to know how Los Blancos can line up in the UEFA Super Cup tonight. 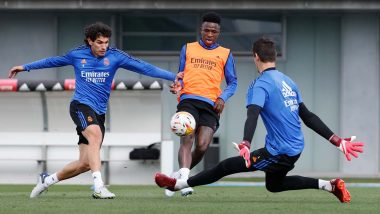 Real Madrid will take on Eintracht Frankfurt in the UEFA Super Cup Final tonight, August 11 at the Helsinki Olympic Stadium in Finland. The high-voltage football match is scheduled to start at 12:30 AM IST (Indian Standard Time). It will be the first competitive fixture for Carlo Ancelotti's Real Madrid this season. Los Blancos clinched their 14th Champions League title while Frankfurt won their second Europa League trophy last season. The two heavyweights would look to finish the game with a victory before kicking off their domestic league campaigns. The Spanish Giants will head into this game on the back of a convincing win over Juventus in a preseason friendly. On the other hand, the German club, having been decimated 1-6 by Bayern Munich in the Bundesliga, would look to get back to winning ways against the Club of the Century.  Real Madrid vs Frankfurt, UEFA Super Cup 2022 Free Live Streaming Online: Watch RMA vs SGE Football Match Live Telecast on TV & Score Updates in IST

This match against Frankfurt would be a opportunity for Carlo Ancelotti to find out the suitable playing XI for Real Madrid before starting their 2022-23 La Liga season. In the three club friendlies, Los Blancos were beaten 0-1 by archrivals Barcelona, drew against Club America and won 2-0 against Juventus. This match in Finland would be a test for many stars of the Royal Whites as they would aim to impress the coach for getting minutes in 2022-23 season. Eden Hazard will be one of the players who is under heavy criticism for his poor run at Spanish capital. Since joining the Club in 2019 from Chelsea, the forward has failed to impress. It's very unlikely of him to feature in the playing XI against Frankfurt. Vinicius Jr and Karim Benzema would lead the attack of Real Madrid. Real Madrid vs Frankfurt, UEFA Super Cup 2022: Head-to-Head, Most Titles and Other Key Stats Ahead of Final Encounter in Finland

In the midfield, Carlo Ancelotti could go with his magical trio- Toni Kroos, Luka Modric and Casemiro. Fede Valverde and Eduardo Camavinga could also feature in the midfield from the beginning as the youngsters have been playing quite a lot in recent times. Newcomer Aurelien Tchouameni would also get a good playing time in the game as the Italian coach is trying to give the French enough time to blend in this new-looking Real Madrid. Stars like Thibaut Courtois, David Alaba, Antonio Rudiger, Eder Militao and Dani Carvajal would be the starters for Los Blancos.

(The above story first appeared on LatestLY on Aug 10, 2022 06:46 PM IST. For more news and updates on politics, world, sports, entertainment and lifestyle, log on to our website latestly.com).