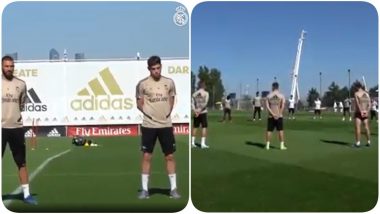 Real Madrid, yesterday ahead of their practice session, paid tributes to the ones who have lost their lives due to coronavirus. The players were seen standing in a circle and prayed for the departed souls and the official account of the Los Blancos shared the video of the same on social media. The COVID-19 has largely impacted the people across the globe. The deadly virus has claimed the lives of more than five million people and as we talk right now, 357,807 have lost their lives to the deadly disease. Spanish Football Federation Allowing La Liga to Play Every Day - for Now.

Needless to say that the virus has affected the lives of the people drastically as most of the countries are still observing a lockdown due in order to break the chain of the deadly virus. Italy and Spain were said to be the worst affected as disturbing visuals surfaced on social media on the number of dead bodies increasing with each passing day.  Even a few footballers like Paulo Dybala, Blaise Mautidi and others got in contact with the disease.  Thus as precautionary meausure, it has been decided that the football stands will witness empty stands with no fans during the games. For now, let's have a look at the video shared by the Los Blancos.

The squad held a minute's silence in memory of the victims of COVID-19.#RealMadrid pic.twitter.com/D5cfhMuHQO

Talking about the return of the La Liga 2019-20 the Spanish football body is aiming to begin the impending season sometime in June. As of now, the teams have been sweating it out in groups.

(The above story first appeared on LatestLY on May 28, 2020 03:43 PM IST. For more news and updates on politics, world, sports, entertainment and lifestyle, log on to our website latestly.com).