The pressure of playing a final will be much more on the Liverpool player than their Real Madrid counterparts who have now made it a habit of playing the summit clash. 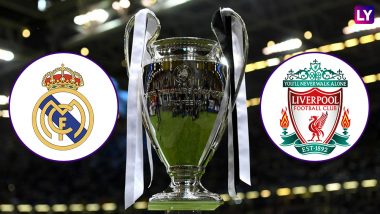 The final game of the 2017-18 sees Liverpool, and Real Madrid, two of Europe’s finest teams who have history, passion and amazing set of fans battle it out to get on their hands on the coveted 2018 UEFA Champions League trophy. In simple perspective it can be put as the ultimate David vs Goliath match and the whole world will have its eyes on it. Liverpool, the underdogs, can certainly beat the Madrid giants, but the biggest question is how they go about achieving it. On the other hand, a Real Madrid win will see them create a record that is sure to remain intact for years to come-a third Champions league title. So, there is a lot to play for in Kiev when the two finalists meet. Real Madrid vs Liverpool will take place on May 27, Sunday at NSC Olimpiyskiy in Kiev, Ukraine. The Champions League Trophy 2018 final match will begin at 12.15 am in Indian time (IST). Real Madrid vs Liverpool, UEFA Champions League Final 2018: Date, Schedule, Road to Finals, and Winner Prediction!

Liverpool has no further injury crisis after losing Alex Oxlade-Chamberlain to a knee injury with Emre Can, Adam Lallana and James Milner all back training and available for selection. Long-term absentees Joel Matip and Joe Gomez are, and apart from them, Jurgen Klopp has a whole bunch of players to choose from. Georginio Wijnaldum will start for Liverpool in Kiev, but all eyes are surely going to be on the front three of Sadio Mane, Roberto Firminio and Mo Salah. Salah, in particular, is the x-factor of this side and can help Liverpool win the title which would give him a clear edge in the race for Ballon d'Or.

Real Madrid talisman Cristiano Ronaldo is fit for the final after being rested for Real Madrid’s season-ending domestic matches owing to a knock he suffered against Barcelona. He has had an incredible second half of the season scoring 30 goals in 22 games and can dismantle the opposition in no time. Casemiro is the man Zinedine Zidane entrusts with protecting the back four, and this leaves Luka Modric and Toni Kroos to roam around the park making up play. Karim Benzema should start the final after his heroics in the semi-final against Bayern Munich. Not much injury concern for Zidane either with the star power fit and raring to go.

Head to Head Battle of Real Madrid vs Liverpool

Both sides do not know how to defend and go hell for leather from the start with no holding back. The pressure of playing a final will be much more on the Liverpool player than their Real Madrid counterparts who have now made it a habit of playing the summit clash. The one who holds the nerves better should prosper, but Real Madrid just have too much quality in them to win this one.

(The above story first appeared on LatestLY on May 25, 2018 03:55 PM IST. For more news and updates on politics, world, sports, entertainment and lifestyle, log on to our website latestly.com).