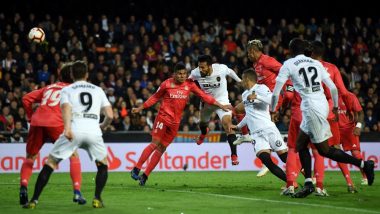 Real Madrid once against takes the field for the game against Valencia. The La Liga 2019-20 fixture will be happening Alfredo Di Stefano Stadium. In this article, we shall bring to you the predicted line-ups for both the teams, but before that let's have a look at the preview for the game. With Barcelona clinching a couple of victories in two matches after their return, they have a five-point lead on the La Liga points table. With 64 points in their kitty, Barcelona stands on number one of the points table. Real Madrid vs Valencia, La Liga 2019–20 Free Live Streaming Online & Match Time in IST: How to Get Live Telecast on TV & Football Score Updates in India?

Real Madrid is on number two with 59 points winning 17 games, losing three out of 28. Rest of the matches have ended with a draw. Both Valencia and Los Blancos have already announced their squad for the upcoming match. The match is happening only three days ahead of hosting Real Sociedad. All eyes will be on Real Madrid manager Zinedine Zidane if he would follow the rotation policy for keeping the team afresh for the upcoming games.

Players like Sergio Ramos, Dani Carvajal or Eden Hazard had some small physical issues during the match against Eibar and they would be doubtful for the fixture. Now let's have a look at the predicted line-ups for both sides below:

(The above story first appeared on LatestLY on Jun 18, 2020 08:26 PM IST. For more news and updates on politics, world, sports, entertainment and lifestyle, log on to our website latestly.com).