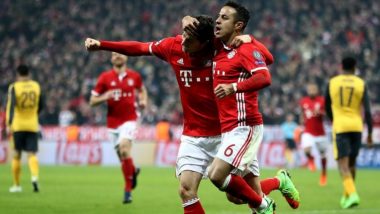 Bayern Munich midfielder Thiago Alcântara has now moved to Liverpool for a reported fee of £25million fee. Robert Lewandowski has bid adieu to his teammate on social media as Thiago penned an emotional note for his fans and the club. In the note, Thiago thanked his teammates and the club for treating him well. Thiago also said that this is the most difficult decision that was made by him and his move to Liverpool was completely a professional decision. Alcantara also recalled his best moments at the club and said that he quits Bayern Munich with a heavy heart as he has been here for about seven years. Liverpool Receive Thiago Alcantara Transfer Boost, Bayern Munich Boss Suggests Midfielder Wants to Experience Another 'Big League'.

Robert Lewandowski retweeted the post and wrote that it was his pleasure playing with a magician like Thiago. Robert Lewandowski also thanked him for his services to the club. "It was a pleasure to play with such a Magician like youGracias Amigo @Thiago6." In his tweet, he also used an emoji of a football and a magician's hat. Check out the tweet below.

It was a pleasure to play with such a Magician like you⚽🎩Gracias Amigo🤜🤛 @Thiago6 https://t.co/H0NKqGZY19

In the following tweet, he also thanked the fans and teammates for the unconditional support they gave him during his tenure with the club. Prior to joining Bayern Munich, he played for Barcelona. He rubbed shoulders with Lionel Messi for four years. Thiago also shared the video the team holding the Champions League 2019-20 which they won against PSG.

(The above story first appeared on LatestLY on Sep 18, 2020 06:22 PM IST. For more news and updates on politics, world, sports, entertainment and lifestyle, log on to our website latestly.com).