ROM vs JUV Dream11 Prediction in Serie A 2019–20: Tips to Pick Best Team for Roma vs Juventus Football Match 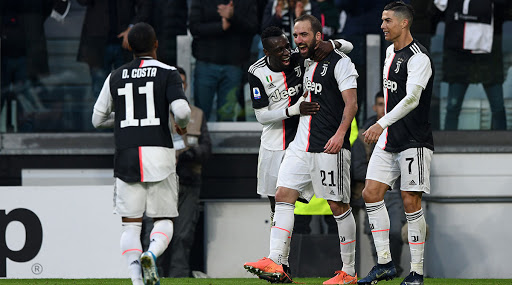 Roma (ROM) will take on Juventus (JUV) in a Serie A 2019-20 clash as they look to take a firm hold on the fourth spot. ROM vs JUV match will be played at the Stadio Olimpico Stadium on January 13, 2020 (Monday). Juventus have a good chance to take a two-point lead at the top of the table as Inter were held to a 1-1 draw by Atalanta on Saturday (January 11). For fans of Dream11 fantasy game, here are some tips and team suggestions so you can build a strong team for the Roma vs Juventus clash in Serie A 2019-20. Team Juventus Sweats it Out Ahead of the Game Against Roma in Serie A 2019-20 (See Pics and Video).

Juventus started 2020 in a brilliant fashion as they defeated Cagliari 4-0 in their last game with Cristiano Ronaldo scoring a hat-trick and setting up a Gonzalo Higuain goal. Roma, on the other hand, suffered a disappointing defeat against Torino at home and will be looking to set things right against the record champions. Roma are fourth in the table with 35 points and have Atalanta on their tail, so this will be an important match for the capital side to put some daylight between them and the Bergamo based club. Cristiano will be looking to add to his goal tally as he looks to close the gap between him and league’s top scorer Ciro Immobile. Cristiano Ronaldo Skips Juventus Team Dinner Ahead of Serie A Clash Against Roma.

Roma vs Juventus, Serie A 2019-20, Dream11 Team Prediction: Goalkeeper – Wojciech Szczesny (JUV) should be selected as your keeper for this match.

Roma vs Juventus, Serie A 2019-20, Dream11 Team Prediction: Defenders – You should ideally go for four defenders in this match and they should be Leonardo Spinazzola (ROM), Alex Kolarov (ROM), Leonardo Bonucci (JUV) and Merih Demiral (JUV).

Roma vs Juventus, Serie A 2019-20, Dream11 Team Prediction: Midfielders – Nicolo Zaniolo (ROM) will be an important player for the home side and should be your vice-captain. The other players in your midfield should be Diego Perotti (ROM), Lorenzo Pellegrini (ROM) and Aaron Ramsey (JUV).

Roma vs Juventus, Serie A 2019-20, Dream11 Team Prediction: Forwards – Gonzalo Higuain (JUV) is in good form and should be selected as your captain. The remaining slot in your team should be filled by Edin Dzeko (ROM).

Both teams will be looking for a victory in this encounter as Juventus have a chance to become the clear Serie A leaders while Roma can put some daylight between them and the remaining teams chasing the top 4 positions.