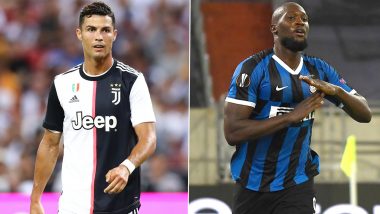 Romelu Lukaku matched a Cristiano Ronaldo record with his goal against Sevilla in the Europa League 2019-20 final. Lukaku scored the opening goal from the penalty spot to put Inter ahead within the opening five minutes. It was, however, his own goal deep into the second half that made the eventual difference as it gifted Sevilla a sixth Europa League title and ended Inter’s campaign without a trophy. But in a night that started with a broad smile and ended in dejection, Lukaku had something to remember. He had matched an elite record last achieved by Cristiano Ronaldo. Sevilla 3–2 Inter Milan, UEFA Europa League 2019–20 Final Goal Video Highlights: Romelu Lukaku Own Goal Helps Sevilla to Record Sixth Title.

Lukaku, who came into the final against Sevilla with six goals in his last five Europa League appearances, fired Inter ahead right in the fifth minute after earning and scoring a penalty. Lukaku tore away from Sevilla centre-back Diego Carlos on a through ball from Nicolo Barella and raced clear on goal forcing the Brazilian to pull him down and concede a penalty. Carlos was booked and Lukaku scored with a low shot into the left corner. Alexis Sanchez Brutally Trolled Online for Another Trophyless Campaign After Europa League Final Defeat.

With the strike from the spot, the Belgian completed an exclusive achievement of scoring in six successive knockout matches in European competitions – a feat last accomplished by Cristiano Ronaldo in 2012-13. Ronaldo had achieved this milestone in the Champions League while playing for Real Madrid. Like Lukaku, Ronaldo too had scored in six successive European knockout matches in that period.

Ronaldo’s goals came against Ajax, Manchester United, Galatasaray and Borussia Dortmund. The Juventus star had scored in the final group match vs Ajax in UCL 2012-13 then followed it with goals in both the legs against his former club Man United and Galatasaray. Ronaldo then scored the final of his six goal-streak in the 1-4 semi-final defeat at Borussia Dortmund. Madrid had won the second leg of the semi-final 2-0, although Dortmund progressed 4-2 on aggregate, Ronaldo had failed to get on the score sheet ending his scoring run in European competitions.

6 - Romelu Lukaku is the first player to score in six consecutive knockout stage matches in major European competition since Cristiano Ronaldo between 2012 and 2013. Inevitable. #UEL pic.twitter.com/nQVEJvagN1

Lukaku scored in both the legs against Ludogorets in the Europa League round of 32 and followed it with a goal each against Getafe and Bayer Leverkusen. He netted a brace against Shakhtar Donetsk before also scoring in the final against Sevilla. Unlike Ronaldo though, the Belgian will have the opportunity to extend his scoring streak and create a new record when Inter start their Champions League campaign next season.

The penalty against Sevilla also took Lkaku’s season goal tally to 34 equalling Ronaldo Nazario’s record for most goals scored for Inter Milan in a debut season. Brazilian Ronaldo had also scored 34 goals in his maiden campaign with Inter in 1997-98 making a record for most goals scored in a debut season for Inter Milan. Lukaku has now equalled that 22-year-old record with his feat against Sevilla. The 27-year-old though would have hoped for another goal. He did score but at the wrong end.

(The above story first appeared on LatestLY on Aug 22, 2020 12:21 PM IST. For more news and updates on politics, world, sports, entertainment and lifestyle, log on to our website latestly.com).