Ronaldo Best of All-Time, Messi, Cristiano or Any Other Footballer Cannot Be Compared to Him: Roberto Carlos 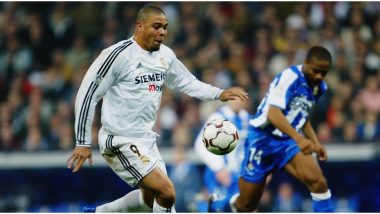 Long before Cristiano Ronaldo and Lionel Messi enchanted the footballing world, there was just one man ruling the hearts – Ronaldo Luis Nazario de Lima. He left everyone mesmerised with his dribbling skills, feints and world-class finishing. Like Messi and Cristiano, Ronaldo too took the footballing world by storm even before he was 21 with his phenomenal goal-scoring instincts. And although injury problems meant he withered away with time, Ronaldo still ranks as one of the greatest footballers of all-time. Former club and national teammate, Roberto Carlos believes there will never be another Ronaldo and not even Messi, Ronaldo, Neymar or any other come close to the greatness of the two-time World Cup winner. This Day, That Year: Barcelona Defeated Arsenal to Lift Their Second UEFA Champions League Trophy.

Ronaldo first burst out to the scene at PSV Eindhoven but his true reckoning came at FC Barcelona, who he led to UEFA Cup Winners’ Cup in 1996-97 with a staggering 47 goals in 49 matches. He went to play for Real Madrid, Inter and AC Milan and finished his career with 352 goals in 518 games. The saying still goes that if not for the recurring knee injuries that jolted his career, Ronaldo would have lived as the greatest ever to have kicked the ball. Lionel Messi Scores Amazing Header, Barcelona Shares Unseen Video of Argentine on Social Media.

Roberto Carlos, who played five years with Ronaldo at the Santiago Bernabeu recalled that Ronaldo was the best. Ronaldo stood out in training. He was the best. There will never be another Ronaldo 'Fenomeno'," Carlos told Goal at the Heineken Legends Challenge. "Not Neymar, Cristiano or Messi – Ronaldo is unique. I think in our generation it was harder to score goals. It was more physical back then and attackers were less protected. But Ronaldo could do everything."

The 47-year-old, who currently serves as an ambassador with former club Real Madrid also remembered how Ronaldo left everyone stunned with a debut double against Deportivo Alaves in his maiden appearance for Real. "I knew how unbelievable he was when he arrived but a lot of people at Madrid didn't. He surprised a lot of people. I remember 80,000 people were very happy and pleasantly surprised by him,” Carlos said.

Ronaldo joined Real Madrid from Inter Milan post-Brazil’s 2002 World Cup success. He wasn’t part of the qualifying campaign after struggling all season with a cruciate ligament injury in his right knee but Ronaldo recovered in time for the World Cup in Japan and South Korea and finished the tournament as the highest-scorer with eight goals, including a double in the final. He was awarded the Golden Boot for his feat.

(The above story first appeared on LatestLY on May 19, 2020 12:18 AM IST. For more news and updates on politics, world, sports, entertainment and lifestyle, log on to our website latestly.com).