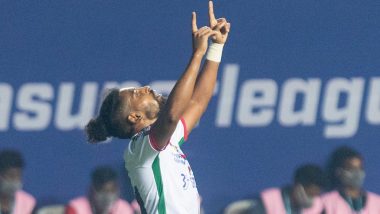 Kolkata, June 3 : Fijian striker Roy Krishna has left ATK Mohun Bagan after two memorable seasons with the club. He played 45 matches for the Indian Super League (ISL) side, having scored 24 times and assisted on 13 occasions in the same, as he led the Mariners to numerous victories. Krishna started his voyage in ISL with erstwhile ATK in 2019-20, where he steered them to their third championship win with 15 strikes (highest that season). The prolific striker was subsequently inducted into the newly-formed ATK Mohun Bagan side the following season, as he went on to become the joint-highest scorer with 14 strikes and also guided them to the final. France 1-2 Denmark, Nations League: Andreas Cornelius Inspires Comeback Win (Watch Goal Video Highlights).

Despite not having the best of seasons, Krishna struck seven times and assisted on four other occasions in the Hero ISL 2021-22 and helped them finish in the top four. After a fruitful tenure at the Kolkata-based club, he finally bid adieu to the Mariners. His departure is certain to leave a void in the ATK Mohun Bagan camp with David Williams also heading out of the exit door. But the Mariners can bank on a battery of Indian attacking talent with the likes of Liston Colaco, Manvir Singh and young Kiyan Nassiri all showing capability of taking the mantle from Krishna.

(The above story first appeared on LatestLY on Jun 04, 2022 10:26 AM IST. For more news and updates on politics, world, sports, entertainment and lifestyle, log on to our website latestly.com).