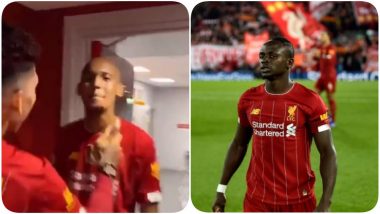 Sadio Mane unleashed his hilarious side as the team picked up the EPL 2019-20 and obviously celebrations were at its peak in the Liverpool camp. Mane hilariously trolled Roberto Firmino for being bald and asked Mohamed Salah to chip in with a few hair strands for Bobby. The incident was recorded on camera as Mane conducted a live Instagram to share celebratory moments of the team with his fans on social media. The team was on cloud nine as they celebrated the much-awaited win and the dressing room atmosphere was obviously very light. Sadio Mane Scrolls his Phone Constantly as Liverpool Celebrate EPL 2019-20 Win, Irritated Netizens Ask Him to Put Away His Phone (Read Tweets).

Liverpool lifted the gong after a long wait of 30 years. Bobby also took the joke very sportingly and was seen laughing at the words of Mane. Earlier we told you Sadio Mane was blasted by the netizens for staying glued to his phone even when the team was picking up the trophy. For now, check out the video of the incident we are talking about.

Mo you have give to fab some of your hair 💇‍♂️ sadio mane Instagram 😂 #CHAMP19NS pic.twitter.com/zUq6pbsBvQ

After the game, players like Virgil van Dijk, Andy Robertson, Jordan Henderson went on to share their happiness with fans on social media by posting tweets about the same. Liverpool played their last match in the EPL 2019-20 against Chelsea and went on to beat them comprehensively by 5-3. With this, the Reds won their 19th league title. The last time they lifted the EPL was in 1990.

(The above story first appeared on LatestLY on Jul 23, 2020 02:34 PM IST. For more news and updates on politics, world, sports, entertainment and lifestyle, log on to our website latestly.com).