Liverpool forward Mohamed Salah was forced to leave the stadium after he injured his shoulder following a tussle with Real Madrid’s captain Sergio Ramos. 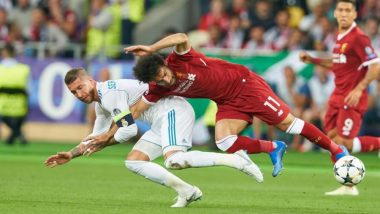 Liverpool forward Mohamed Salah was forced to leave the stadium after he injured his shoulder following a tussle with Real Madrid’s captain Sergio Ramos. Knowing the fact that his UEFA Champions League finals will remain a mere dream, Mo Salah left the pitch teary-eyed. The Real Madrid captain had pulled Salah after the ball had gone and the Egyptian landed on his opposite shoulder. This act garnered Ramos with criticism from the fans

However, Ramos took to Twitter and clarified his stand. He even sent good wishes to Salah. Ramos’ tweet read, “Sometimes football shows you it's good side and other times the bad. Above all, we are fellow pros. #GetWellSoon @MoSalah.”

After making an exit from the stadium, the Egyptian underwent an X-Ray. Liverpool manager Jurgen Klopp while talking about Ramos’ injury said, “He would have played on if anything was possible. He has gone for an X-Ray but it doesn’t look good.”

Kloop further said it was a hard challenge by Ramos. “Of course it was a big moment in the game. ‘I know if you say something like that after a game you lost, it sounds like you are a little bit a bad loser but it was, for me, kind of a harsh challenge. ‘It’s like wrestling a little bit and it’s unlucky then that Mo fell on his shoulder.” However, Egypt is hopeful that the Liverpool star will be fit by the FIFA World Cup 2018.  Talking about the Champions League finals, Real Madrid won the game by 3-1. Real Madrid has won the title for the third time in a row.

(The above story first appeared on LatestLY on May 27, 2018 04:17 PM IST. For more news and updates on politics, world, sports, entertainment and lifestyle, log on to our website latestly.com).