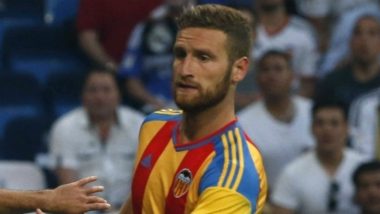 London, July 25: Arsenal defender Shkodran Mustafi has been ruled out of the FA Cup final against Chelsea scheduled to be played on August 1 because of a hamstring injury.

Mustafi sustained the injury during Arsenal's 2-0 semi-final win over Manchester City at Wembley last week. Arsenal were strong in their defence against City, with Mustafi and David Luiz proving key performers in that game.

"Will miss remaining matches of this season. Further details on recovery programme will be confirmed in the coming days," the Premier League club said in a statement.

The 28-year-old, who arrived at the club from Valencia in 2016, has received plenty of criticism for his inconsistent displays. However, under Mikel Arteta, he has started 12 of Arsenal's last 15 Premier League games.

The FA Cup final will be the Gunners' only chance to secure the ticket to Europa League, as they are confirmed to finish outside the Premier league's top six after their loss to Aston Villa.

(The above story first appeared on LatestLY on Jul 25, 2020 12:00 PM IST. For more news and updates on politics, world, sports, entertainment and lifestyle, log on to our website latestly.com).