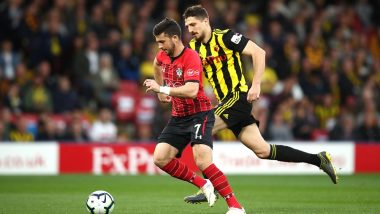 London, June 4: Southampton forward Shane Long has agreed to a two-year contract extension at St Marys, the club said in a statement on Thursday. The Republic of Ireland international had been approaching the end of his pre-existing deal this summer, but is now set to remain with Saints until the end of the 2021/22 season. Long, 33, has been with the club since the summer of 2014, recently making his 200th appearance for the team, and he has been an important part of Ralph Hasenh'ttl's squad since the manager took over 18 months ago.

"I love the way the club is run, I love what the club stands for'and I'm excited about what the club will do over the next couple of years," Long told the club's official website, southamptonfc.com. "I can see the club pushing up the league, back to where we all want to be, and I want to be part of'that. I'm just delighted to get it done." Shane Long Scores Fastest Goal of Premier League History in Record 7.69 Seconds Against Watford; Watch Video.

Southampton are 14th in the English Premier League table after playing 29 games. The league is expected to restart from June 17 after it was stopped in March due to the coronavirus pandemic. Meanwhile, one member of Tottenham Hotspur's squad has been diagnosed with COVID-19, the Premier League club has confirmed.

On Wednesday, the Premier League announced the results of the fifth-round of testing, confirming just one out of the 1,197 players and club staff that were tested on Monday and Tuesday returned positive. In the previous four rounds of testing, there were a total of 12 positive cases out of 3,882 tests.

(The above story first appeared on LatestLY on Jun 04, 2020 07:16 PM IST. For more news and updates on politics, world, sports, entertainment and lifestyle, log on to our website latestly.com).