Switzerland Squad for 2018 FIFA World Cup in Russia: Lineup, Team Details, Road to Qualification & Players to Watch Out for in Football WC

They will be playing two international friendlies, vs. Spain on June 4 and vs. Japan on June 8 before beginning their quest for world cup in Russia. 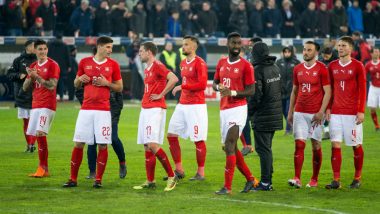 Switzerland is constantly moving up the ladders in the FIFA rankings and has a very mix bag squad having both youthful exuberance and experience in the ranks. It is quite surreal, but the Swiss are ranked sixth in the world and certainly can go the distance in the 2018 FIFA World Cup in Russia under the management of former Lazio coach Vladimir Petkovic. Although we may be forgiven to say they do not have one superstar figure, but individuals do not win you championships, it is the team effort that makes it count. Switzerland is scheduled to face five-time world champions Brazil on June 17 in their tournament opener. We will take a detailed look at Switzerland team lineup, squad news, their road to qualification and players to watch out for in football WC in Russia. FIFA World Cup 2018 Schedule in IST for PDF Download: Fixtures, Groups, Time Table with Match Timings & Venue Details of Football WC in Russia.

Juventus full-back Stephan Lichtsteiner, Johan Djourou, Ricardo Rodriguez and Fabian Schar are all decent defenders and have played together long enough to adapt to each other’s game. Goalkeeper Yann Sommer is the first choice for Switzerland, and his backup choices really have no experience under their belt which is a real worry. The midfield is packed with players of foreign origin who chose to play for Switzerland with Valon Behrami, Xherdan Shaqiri and Granit Xhaka popular name among those. 2018 FIFA World Cup Friendlies Fixtures: Check Full Warm-Up Schedule Timetable in Indian Time for Germany, Brazil, Spain, England, Argentina and All 32 Countries.

The choice of the central striker who will be flanked by pace wide men is still a mystery for the Swiss. Josip Drmic has missed a lot of matches due to an injury while Haris Seferovic has been left out of Benfica’s playing eleven in quite a few matches. Breel Embolo is another option and could be drafted in the side.

Switzerland finished tied with Portugal on 27 points in Group B of the European World Cup qualifiers but an inferior goal difference pushed them to the second spot and set up a play-off match against Northern Island. A Ricardo Rodriguez penalty in the first leg in Belfast was the only goal of the tie as Switzerland clinched a World Cup place.

Switzerland Group E opponents Ecuador and Honduras were comfortable brushed aside 2-1 and 0-3 in the opening two matches by the Swiss but faced humiliation at the hands of France 2-5. They made it to the round of 16 where they were knocked out 1-0 by 2014 World Cup finalist Argentina.

Stephan Lichtsteiner: The captain if the squad and a serial winner with Juventus in Italy, this ever dependable full-back have a lot to offer for Switzerland in Russia. He offers width to the team when attacking, and if things are not going well, he will tuck in to make the back four more compact.

Xherdan Shaqiri: A poor season in England where his club Stoke City got relegated, he has to make an impact in Russia not only for his country but there is a shade of personal benefit to has a lot of top clubs are monitoring his situation as a player like him won't certainly play in the second tier of football.

Switzerland is placed in Group E with Brazil, Serbia and Costa Rica. They will be playing two international friendlies, vs. Spain on June 4 and vs. Japan on June 8 before beginning their quest for world cup in Russia.

(The above story first appeared on LatestLY on May 31, 2018 04:56 PM IST. For more news and updates on politics, world, sports, entertainment and lifestyle, log on to our website latestly.com).