Team Brazil Boycotts Copa America 2021, Casemiro Suggests His Entire Squad is Against the Idea of Hosting Tournament in Brazil 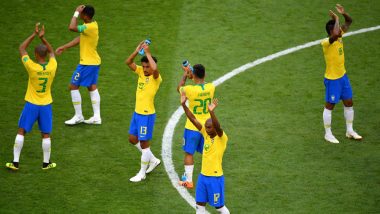 Casemiro, the captain of Brazil has already expressed his views and said that the team is against the tournament being held in the country. "Everyone knows our position in the Copa America in Brazil," the captain said following the Ecuador match. "It could not be clearer. We want to express our opinion more after the game against Paraguay. In fact, he had refused to speak to the reporters a day before that match against Ecuador. Tite was one of the first ones to express his displeasure openly. Other players including Edinson Cavani, Luis Suarez and others have also spoken against the idea of conducting Copa America in Brazil.

Even Rio de Janeiro's Mayor Eduardo Paes had said that he would call off the Copa America matches in the city if the COVID-19 condition deteriorates any further.

(The above story first appeared on LatestLY on Jun 06, 2021 12:33 PM IST. For more news and updates on politics, world, sports, entertainment and lifestyle, log on to our website latestly.com).